Relations with other Religions 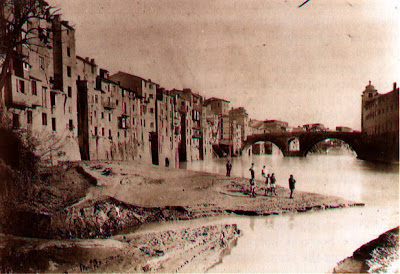 Old houses in the Roman Ghetto overlooking the River Tiber, from a photograph taken in 1886

Part of the concluding message of the 12th Ordinary General Assemby of the Synod of Bishops which was approved on 24th October 2008 at the 21st General Congregation included a significant passage on relations with other religions:

"14. Along the roads of the world, the divine word generates for us Christians an equally intense encounter with the Jewish people, who are intimately bound through the common recognition and love for the Scripture of the Old Testament and because from Israel "so far as physical descent is concerned, came Christ" (Rm 9:5).

Every page of the Jewish Scriptures enlighten the mystery of God and of man. They are treasures of reflection and morality, an outline of the long itinerary of the history of salvation to its integral fulfillment, and illustrate with vigor the incarnation of the divine word in human events. They allow us to fully understand the figure of Christ, who declared "Do not imagine that I have come to abolish the Law or the Prophets. Ihave come not to abolish but to fulfill them" (Mt 5:17).

These are a way of dialogue with the chosen people, "who were adopted as children, the glory was theirs and the covenants; to them were given the Law and the worship of God and the promises" (Rm 9:4), and they allow us to enrich our interpretation of the Sacred Scriptures with the fruitful resources of the Hebrew exegetical tradition.

"Blessed be my people Egypt, Assyria my creation, and Israel my heritage" (Is 19:25). The Lord, then, spreads the protective mantle of his blessing all over the peoples of the earth: "he wants everyone to be saved and reach full knowledge of the truth" (1 Tm 2:4).

We, also as Christians are invited, along the roads of the world - without falling into a syncretism that confuses and humiliates our own spiritual identity, to enter into dialogue with respect towards men and women of the other religions, who faithfully hear and practice the directives of their sacred books, starting with Islam, which welcomes many biblical figures, symbols and themes in its tradition, and which offers the witness of sincere faith in the One, compassionate and merciful God, the Creator of all beings and Judge of humanity."