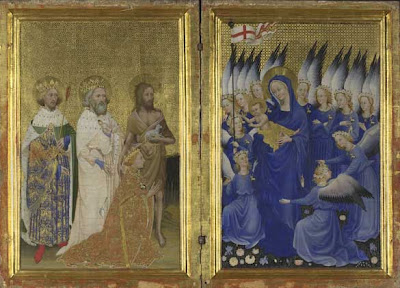 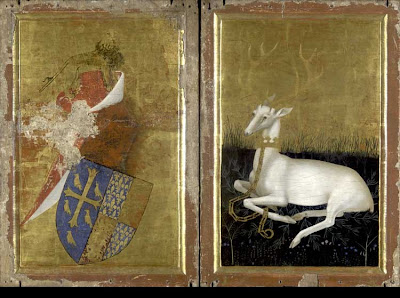 Anonymous
Richard II presented to the Virgin and Child by his Patron Saint John the Baptist and Saints Edward the Confessor and Edmund ('The Wilton Diptych') about 1395-9: Front and reverse
Egg tempera on oak
57 x 29.2 cm
The National Gallery, London

Often when we look at paintings, we do not take in the whole meaning intended by the artist.

The "key" to the symbols has often been forgotten.

In an article in today`s Times, Justin Scroggie provides some of the "keys" to five paintings in The National Gallery in London.

For an explanation of some of the symbols in Holbein`s "The Ambassadors" (also in The National Gallery in London), see At 27º to the universe by Theodore K Rabb
Posted by Unknown at 5:16 pm