October and the Rosary 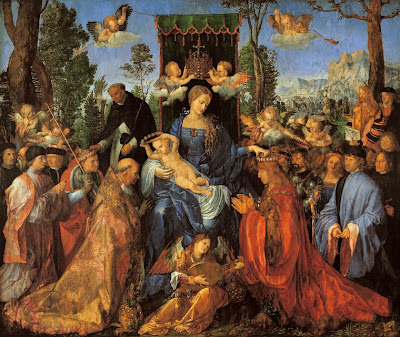 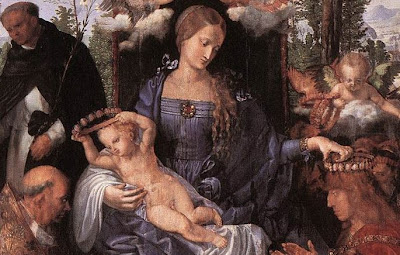 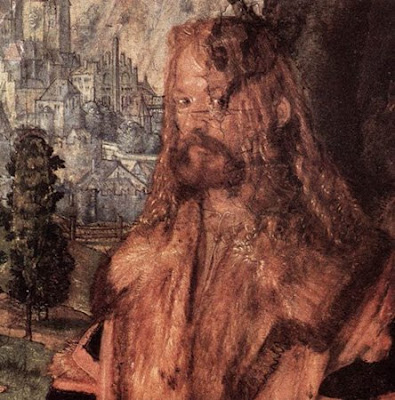 October is of course the month of Mary and the Rosary.

This painting was commissioned by a Confraternity of the Rosary in Venice in the sixteenth century, before the Reformation.

In France, this painting is known as La Vierge de la fête du rosaire (The Virgin of the Feast of the Rosary), which is probably preferable to the English title.

Unfortunately the painting has been badly damaged through the Ages and it has also suffered from bad restoration processes during that time. At one time in the eighteenth century it was sold at auction for a florin.

There are three copies of the painting in other hands and institutions. The original is now in Prague.

The work was completed during Dürer`s second stay in Venice. He painted himself into the picture. In the top right, he is man with blonde hair staring at the viewer, in the midst of what appears a German landscape. The detail above shows the figure in greater detail.

He is holding a sheet of paper.

On the paper is written: EXEGIT QUINQUE MESTRI SPATIO ALBERTUS DURER GERMANUS MDVI. (`Albrecht Dürer, a German, produced it within the span of five months. 1506.')

It is thought that it was commissioned for merchants in the German colony in Venice, possibly for the Confraternity of the Blessed Rosary (founded in Augsburg in 1476). It was to be an altarpiece in the church of S. Bartolomeo near the Fondaco dei Tedeschi, the social and commercial centre of the German colony

It depicts an ideal congregation of the Brotherhood of the Rosary.

Beside the figure of Dürer is probably Leonhard Vilt of Regensburg, a printer active in Venice and founder of the Brotherhood of the Rosary in Venice.

On the knee of the Madonna is the "signature" of Dürer: a fly.

There is a fascinating part of the website for The National Gallery of Prague simply on this important painting.

The painting marks the end of the Fifteenth century Medievalism and the beginning of the new style of the Sixteenth Century Renaissance.

The Rosary attained many devotees throughout Europe in the Fifteenth Century. There was a sudden emergence and explosion in brotherhoods across the Holy Roman Empire and in Italy. Venice's confraternity was established in 1480.

The lack of superfluous detail in the painting concentrates the viwer`s attention on the religious theme of the painting. The variety of gestures of the figures in the painting gives rise to an impression of movement. The variety of expressions of the figures and the interaction of the figures create not a tableau but a complex scene depicting a vibrant society. The figures are naturalistic. The balance and composition remind one of the influence of Venetian painting especially Giovanni Bellini. Perhaps this is not surprising. The principal formal models for the piece were wroks by Bellini: the Pala Barbarigo of 1488 and the San Zaccaria altarpiece of 1505. There is a monumentality to the figures which prefigures the style of the Cinquecento.

Dürer expressed his satisfaction that the picture had silenced all of the Italian artists who had criticised his painting technique and, above all, his use of colour. It is clear from the surviving correspondence that he placed considerable importance on this altarpiece. He spent a lot of time on this painting. He made innumerable studies. Twenty one studies of wash on blue paper survive.

The painting was well received from the beginning. The earliest Italian source of 1548/49 refers to Dürer's painting as one of the artistic highlights of Venice along with the horses of San Marco and pictures by Giorgione and Titian.
Posted by Unknown at 6:32 pm