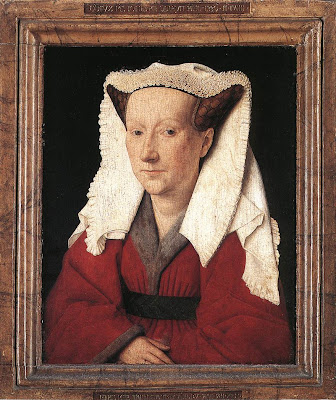 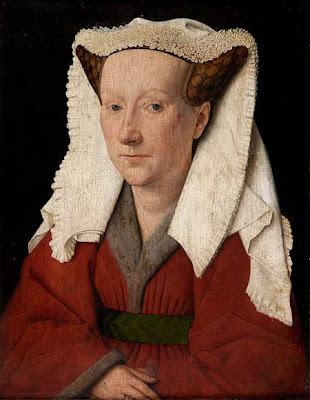 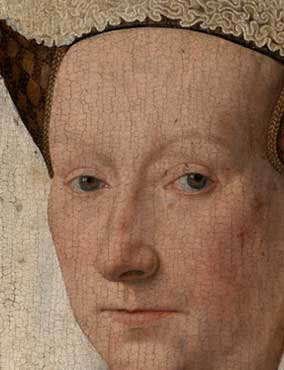 From 15th October 2008, The National Gallery in London has an exhibition entitled Renaissance Faces: Van Eyck to Titian

Its exhibits will demonstrate the dramatic rise of portraiture in the Renaissance and will feature works by the great masters of Northern and Southern Europe, including Raphael, Titian, Botticelli, Van Eyck, Holbein, Dürer, Lotto, Pontormo and Bellini.

Portraiture reached its height at the Renaissance.

Why is there interest in the portraits of people long dead and about whom there is very little known ?

The Renaissance did not invent portraiture. Portraits go back to at least Ancient Egypt.

But for some reason there was an explosion in demand and in supply of portraits in Europe at the time of the Renaissance.

Now almost five, six hundred years later, we can not be but fascinated by the persons behind the images and wonder who they were and what they were like. Do we see something of ourselves in these images ?

The portrait of the Margaret, the wife of the famous painter Jan van Eyck can not fail to be a major exhibit. Especially as it will apparently be displayed beside the portrait of the person who may be her husband, the artist himself. There is something fascinating in the idea that after nearly six hundred years, the images of the long dead husband and wife will be briefly re-united. (even although the paintings were painted six years apart)

As regards Margaret, not much is known.

Margaret was born in 1406. Van Eyck married her in 1431. After the marriage of his master and patron, Philip the Good, van Eyck decided to settle down too. He bought a house in Bruges and that year married Margaret.

One of the children was a daughter, who years later became a nun in the convent of Maeseyck. At the christening of this child the duke was sponsor, and this was but one of many distinctions by which Philip the Good rewarded his painter's merits.

One critic (E. Dahnens, 1980) has suggested that van Eyck`s The Lucca Madonna and Child may be a likeness of the artist`s wife, Margaret and one of their new born children. However the theory seems to lack concrete evidence.

The portrait of Margaret is still in its original frame.

The panel incorporates the mock-chiselled 'speaking' inscription: my husband Johannes finished painting me in the year 1439 on 15 June / my age was thirty-three.

This is followed by the artist's own motto in Greek characters, als ikh kan (to the best of my ability).

It is thought that the portrait was painted for presentation to the Bruges Guild of Painters together with one of the artist himself (now lost). For many centuries it was in the possession of the Guild Corporation (until the French Revolution).

She is shown in her best finery. She wears a dress with a thick fur-lined collar. reflecting her husband's financial success. She is wearing a veil of seven layers of cloth. Her hair is dressed in a new horn head-dress, edged with small braids and tightly packed into a patterned net. The effect is to suggest a person of wealth.

It does not flatter like some of his other commissions. But there is a delicacy in the execution and colour.

Sadly, the marriage only lasted ten years and was terminated by the death of the artist who is buried in the Church of Saint-Donatian, in Bruges
Posted by Unknown at 5:13 pm