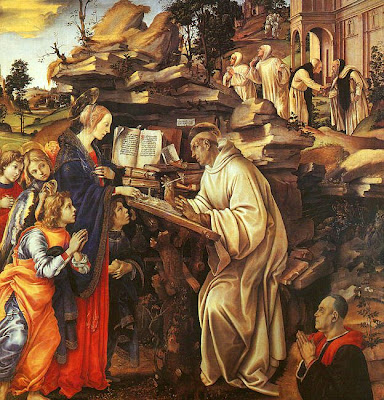 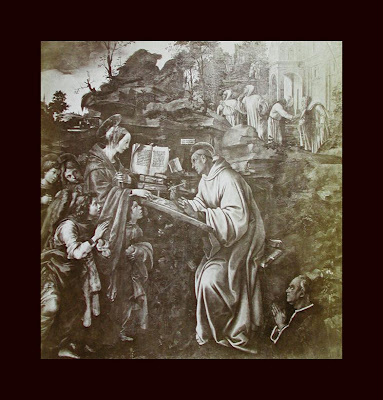 Florence has been a Marian city for centuries. Its devotion to Mary can be seen by the great number of Marian images in the streets, the churches, chapels, art galleries and museums. Its medieval Cathedral is called Santa Maria del Fiore.

One of the oldest buildings in Florence is the Badia (the Abbey).

The Badìa Fiorentina is an abbey and church of the Fraternity of Jerusalem situated on the Via del Proconsolo in the centre of Florence. Amongst other things, it is famous for being the parish church of Beatrice Portinari, the love of Dante's life, and the place where he watched her at Mass.

Later, Boccaccio delivered his famous lectures on Dante's The Divine Comedy in the church.

The abbey was founded as a Benedictine institution in 978 by Willa, Margravine of Tuscany, in commemoration of her late husband Uberto, and was one of the chief buildings of medieval Florence

Now, despite a baroque transformation in the seventeeth century, the most striking feature of this historic interior is the above painting by Filippino Lippi

The panel was originally painted for the small monastery controlled by the Abbey, Santa Maria alle Campora di Marignolle. Florence was besieged in 1529 and the painting was transferred to the Badia for safekeeping.

The painting depicts a story narrated in the Golden Legend.

St. Bernard (c.1090-1153) with a group of monks founded the monastery of Clairvaux, which he directed until his death

St Bernard was once afflicted by a moment of weakness. The Virgin appeared to him in a vision ad his courage was restored.

The open book in the painting shows that the saint had been writing on the Annunciation. The relevant text from St Luke`s Gospel ( Luke 1: 26-31) is clearly legible. It is a message of hope.

However this is a "reverse" Annunciation: Mary became Gabriel and appears to the saint. She announces salvation.

It is not a triumphant Mary. It is the Mother of God who emphathises with the saint`s internal struggle and his fatigue.She is human like. Her feet are firmly planted on the ground. She is surrounded by a small retinue of angels. She places her hand on the book.

The monk-theologian with his great devotion to Mary looks at her with love, after the initial joyful surprise. He becomes transformed. His resolve is restored.

His fellow monks are oblivious to what is happening to the saint. However they seem to sense that something strange and miraculous is occurring somewhere. They see a light in the sky.

The viewer sees everything. We are privy to the vision and experience of St Bernard which dominates the painting.

The manuscript on which Saint Bernard is writing has the words “Let me say something concerning this name [Mary] also, which is interpreted to mean “star of the Sea” and admirably suits the Virgin Mother…” taken from the saint`s second homily, Super missus est.

Super missus est is a collection of four homilies written by Saint Bernard about the Annunciation. This text had a profound effect on Marian devotion. Bernard concluded this homily with the words, “When the storms of temptation burst upon you, when you see yourself driven upon the rocks of tribulation, look up at the star, call upon Mary…”

The moral message of the painting is reinforced by an inscription near the portrait of the donor [Piero del Pugliese, a successful Florentine wool merchant] in the lower right of the painting.

Viewers are encouraged to always seek the help of Mary in times when afflicted by doubt.

Some critics have seen this painting by Filippino Lippi as the beginning of a new trend of realism and psychological realism which came into Florenting painting at the end of the 15th Century.

The vision of Saint Bernard is a theme almost unique to Florence and rarely seen outside Tuscany during the Renaissance. It was particularly popular in Florence in the period 1490-1530.

St Bernard was patron of the Cappella dei Priori (Chapel of Priors) of the Florentine republican government located in the newly constructed Palazzo Vecchio.

His selection as the patron saint was probably largely due to his reputation as a peacemaker and arbitrator.

Later during the time of Savonarola from 1494 onwards, Savonarola used amongst others St Bernard as a model for reform.
Posted by Unknown at 6:51 pm