St Teresa and Her Big Brother 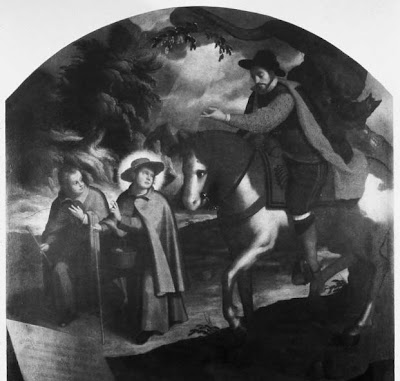 Luis Juárez, ca.1585-1638
St. Teresa and Her Brother Rodrigo on Their Way to the Land of the Moors, first half 17th century.
Oil on canvas
Museo Nacional de las Intervenciones, Churubusco.

When Teresa was six, she slipped away from her home with her older brother Rodrigo, aged ten. Both intended to go to the Land of the Moors to teach the Gospel - and to seek the glory of martyrdom. Teresa appears to have been the driving force behind the attempt to go away, buoyed up as she was by the stories of the saints in which she immersed herself as well as thoughts of the Reconquest of Spain and her mother`s stories of chivalry.

They passed through the Adaja Gate; but when they had crossed the bridge, they were met by one of their uncles, who brought them back to their mother

In her Autobiography, St Teresa wrote:

"4. One of my brothers was nearly of my own age; and he it was whom
I most loved, though I was very fond of them all, and they of me. He
and I used to read Lives of Saints together. When I read of martyrdom
undergone by the Saints for the love of God, it struck me that the
vision of God was very cheaply purchased; and I had a great desire to
die a martyr's death,--not out of any love of Him of which I was
conscious, but that I might most quickly attain to the fruition of
those great joys of which I read that they were reserved in Heaven; and
I used to discuss with my brother how we could become martyrs. We
settled to go together to the country of the Moors, begging our
way for the love of God, that we might be there beheaded; and our
Lord, I believe, had given us courage enough, even at so tender an age,
if we could have found the means to proceed; but our greatest
difficulty seemed to be our father and mother.

5. It astonished us greatly to find it said in what we were reading
that pain and bliss were everlasting. We happened very often to talk
about this; and we had a pleasure in repeating frequently, "For ever,
ever, ever." Through the constant uttering of these words, our Lord was
pleased that I should receive an abiding impression of the way of truth
when I was yet a child.

6. As soon as I saw it was impossible to go to any place where people
would put me to death for the sake of God, my brother and I set about
becoming hermits; and in an orchard belonging to the house we
contrived, as well as we could, to build hermitages, by piling up small
stones one on the other, which fell down immediately; and so it came to
pass that we found no means of accomplishing our wish. Even now, I have
a feeling of devotion when I consider how God gave me in my early youth
what I lost by my own fault. I gave alms as I could--and I could but
little. I contrived to be alone, for the sake of saying my prayers
--and they were many--especially the Rosary, to which my mother had a
great devotion, and had made us also in this like herself. I used to
delight exceedingly, when playing with other children, in the building
of monasteries, as if we were nuns; and I think I wished to be a nun,
though not so much as I did to be a martyr or a hermit."

(The Life of St. Teresa of Jesus, Written by Herself. Translated from the Spanish by David Lewis [Third Edition] 1904, Chapter 1)


On November 2, 1535, at the age of 20, Teresa and her brother again ran away from home to pursue religious vocations. Teresa entered the Carmelite Monastery of the Incarnation at Avila. Alonso de Cepeda, her father, resigned himself to her decision. A year later, Teresa was professed and took the habit.

Both siblings were born on the same date: 28th March.

Rodrigo de Cepeda, four years older than the Saint, entered the army, and, serving in South America, was drowned in the Rio de la Plata St. Teresa always considered him a martyr, because he died in defence of the Catholic faith. Before he sailed for the Indies, he made his will, and left all his property to the Saint.
Posted by Unknown at 6:43 pm