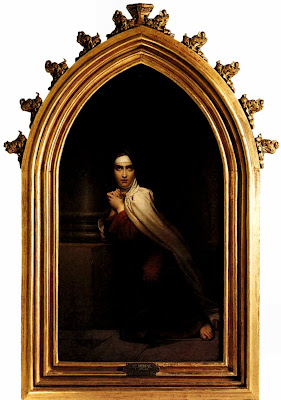 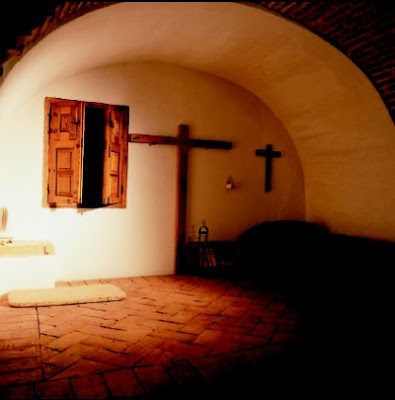 In art, the image of The Transverberation of St Teresa was very popular and very common.

Of the Transverberation, or piercing of the heart which occurred around the year 1560, she wrote:

"I saw close to me toward my left side an angel in bodily form […] in his hands [was] a large golden dart and at the end of the iron tip there appeared to be a little fire. It seemed to me this angel plunged the dart several times into my heart and that it reached deep within me. When he drew it out, I thought he was carrying off with him the deepest part of me; and he left me all on fire with great love of God. The pain was so great that it made me moan, and the sweetness this greatest pain caused me was so superabundant that there is no desire capable of taking it away."

The classic of this image is of course Bernini’s Transverberation in the Cornaro Chapel, in the left transept of the Church of S. Maria della Vittoria in Rome.

On 12th March 1662, St Teresa, was canonised in a ceremony which at the same time canonised Francis Xavier, Isidore of Seville, Ignatius of Loyola, and Philip Neri. Banners depicting each of the figures hung in the crossing of St Peter`s. St Teresa’s banner bore a depiction of the Transverberation.

But it cannot be all ecstasy and delight.

Shortly before her death, St Teresa wrote in May 1582 to a sister in her order who had complained of felings of spiritual "dryness" after a period of spiritual "ecstasy" or delight. She explained:

"God is leading you as though you were someone he already has within his palace, who he knows will never leave and to whom he desires to give more and more bay which you can merit....

Prize being able to help God carry the cross and don't be clinging to delights. for it is the trait of mercenary soldiers to want their daily pay at once. Serve without charge, as the grandees do the king."
Posted by Unknown at 7:02 pm