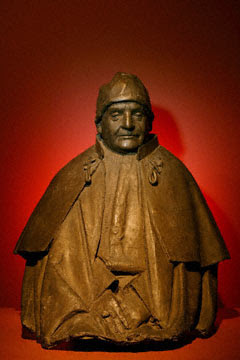 "Several years ago I had signed up to celebrate Mass at the resting place and altar of Blessed John XXIII. A few of our young staff from Salt and Light Television were with me. When we arrived for the celebration, the young Italian priest who preceded me at the altar had already gone "overtime."

The priest had a group of young adults with him and they were peering into the glass casket holding the remains of Papa Giovanni. It was annoying to watch them take their blessed time, meaning we would have less time at the altar! We waited patiently, knowing that our group would only have 25 minutes to celebrate this Mass.

As the Italian priest left the altar, he walked over to me and apologized for being late. He then said something that sounded odd. "Sorry Padre, but we don't get to come here often and my cousins and I wanted to just be close to 'zio' for a while!"...

We went on with our own celebration and it had to be the fastest Mass I ever celebrated. Guards reminded us that we had to be out of there in 23 minutes.

When we returned to the papal sacristy and unvested, I signed the register and noticed that just above my name was the signature of a priest named "Giovanni Roncalli." I asked the guardian if this was true. "Certo," he said. Padre Giovanni is the great-nephew of "il buon Papa" and he is in charge of youth ministry in Bergamo!"
Posted by Unknown at 5:55 pm