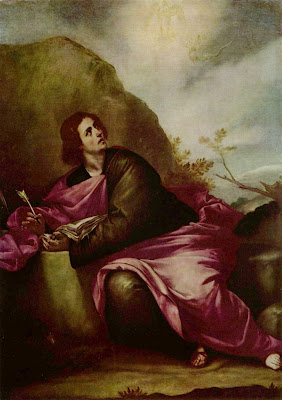 In view of the present Synod on Scripture, perhaps an appropriate painting.

Alonso Cano is the most celebrated draughtsman among all the classical Spanish painters. He is sometimes called the Spanish Michelangelo.

He was almost an exact contemporary of Velázquez. Like Velázquez, he was a pupil of Francisco Pacheco in Seville.

As well as a painter, he was an accomplished architect, and sculptor

He was impetuous, volatile and had an ungovernable temper.

He was married twice. His second wife was found murdered. He was suspected and put under the rack and the torture. He survived and was acquitted.

He took holy orders and was made Residentiary of Grenada.

From 1652 he worked mainly in Granada, where he designed the façade of the cathedral (1667), one of the most original works of Spanish Baroque architecture.

The cathedral has several of Cano's works in painting and sculpture, including a polychrome wooden statue of the Immaculate Conception (1655) that is sometimes considered his masterpiece.

For those interested in the theories of Pacheco they may wish to consult Art in Theory By Charles Harrison, Paul Wood, and Jason Gaiger especially Chapter 1 where there are lengthy extracts from The Art of Painting ( Arte de la pintura) on Google books in the preview section.
Posted by Unknown at 2:45 pm