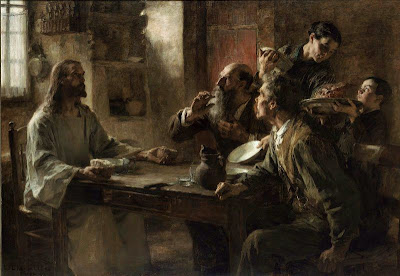 
Does the Face of Christ in the painting above look familiar ?

Try again with this detail of the painting: 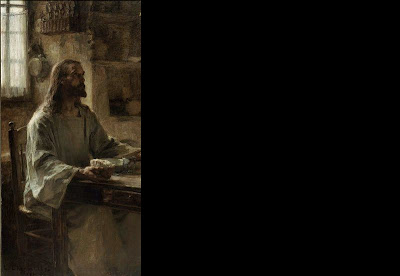 L`hermitte is perhaps not as well known as he was in his time or should be now. He was an accomplished artist. He painted religious themes as well as pastoral scenes with scenes of French peasantry, recalling a time before the industrialisation of society.

Of him, Vincent Van Gogh said:

“If every month Le Monde Illustré published one of his compositions…it would be a great pleasure for me to be able to follow it. It is certain that for years I have not seen anything as beautiful as this scene by Lhermitte…I am too preoccupied by Lhermitte this evening to be able to talk of other things.” (quoted in Léon Lhermitte 1844-1925, ex. cat., Beverley Hills: New York: Galerie Michael) 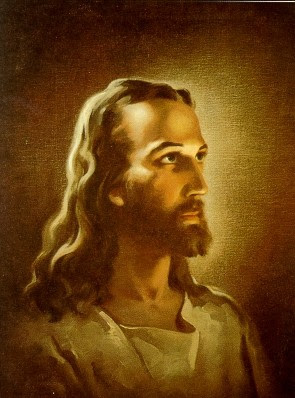 Sallman said that he was taken by a print of the painting on the cover of the Ladies Home Journal.
Rather than concentrating on the historical detail of the French work, Sallman opted for a close up with soft lighting: almost like one of the 1930/40 photographs of movie stars or other celebrities of the period.

Warner Sallman (1892–1968) was a Christian painter from Chicago. He worked as a freelance illustrator. His portrait of Christ, The Head of Christ, of which more than 500 million copies have been sold, is better known than he is

When Christ or his mother are mentioned many people admit that it is not the words of the Bible that come to mind but rather concrete images or pictures.

Because of the great circulation of the painting by Sallman in the 1940s and 1950s and onwards, for many people the name of Christ may conjure up the above image. And all because someone saw a print of a French painting on the cover of the Ladies Home Journal.

For more about this story and the famous print see The Warner Sallman website
Posted by Unknown at 5:35 pm