The Holy Family with the infant St. John the Baptist 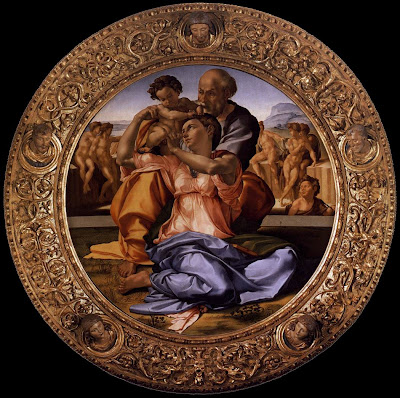 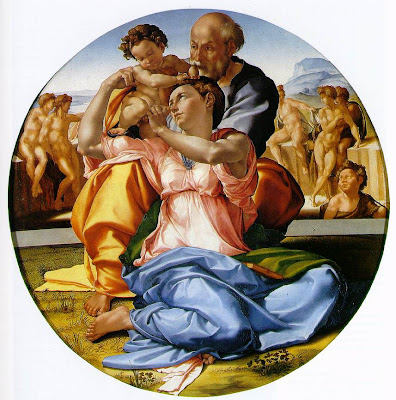 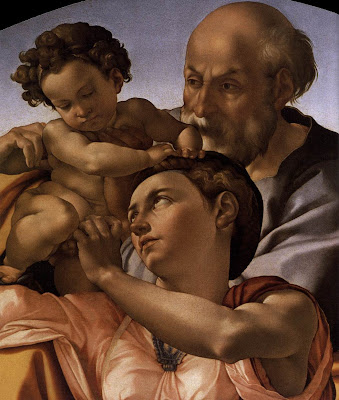 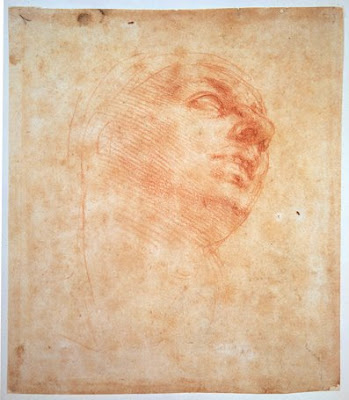 Michelangelo Buonarroti (b. 1475, Caprese, d. 1564, Rome)
Study for the Head of the Madonna of the Doni Tondo(1504-1506)
Red pencil on paper 200 x 172mm
Casa Buonarroti, Florence
The Doni Tondo was probably commissioned by Agnolo Doni (a wealthy weaver) and his wife (Maddalena Strozzi) for the birth of their daughter Maria on 8th September 1507. Alternatively it has been put forward that it was meant to commemorate and celebrate the marriage of Agnolo Doni and Maddalena Strozzi in 1504.

The tondo was painted after January 1506 when the Laocoon was uncovered in Rome in the presence of Michelangelo.

The painting is dominated by the serpentine composition of Christ, Mary and Joseph in the foreground.

Mary, sitting on the ground, is taking Jesus from the arms of Joseph. The three are oblivious to the other figures. Mary`s eyes and her son`s eyes both stare at each other intently. Joseph seems to be gazing at Jesus, but on closer look his gaze is midway between Jesus and Mary.

Behind the wall which separates the Holy Family from the rest are three groups of figures.

The small boy (who looks like a satyr) apparently gazing at the Infant Jesus represents John the Baptist, patron saint of Florence.

The youths sitting or standing by a balustrade are classical figures. The nude figure behind St Joseph is based on one of the figures in the Laocoon.The other nudes derive from other classical sculptures known at the time.

Behind everything is a simple landscape disappearing into the distance.

The frame was probably designed by Michelangelo. The painting hangs in the Uffizi in its original frame. The Doni Tondo was separated from its original frame during the Enlightenment period, but it was later reunited after the realisation of its importance to the piece as a whole.

The Doni Tondo stood the test of time because of Michelangelo's construction of the frame. The frame was supported with a batten made of coniferous wood. It was constructed of pear wood because fruit woods are advised for optimal carving.

The gilt wood frame, attributed to the Tasso family of woodcarvers, displays the Doni family arms with lions on them intermingled with Strozzi (the family of the patron's wife Maddalena) crescents.

As well as grotesques, the frame contains the heads of two prophets and two sybils surmounted by one of Christ.

When finished, Agnolo Doni was not sure that he wished to pay for it. He thought it too expensive. Further, details of the composition itself aroused criticism: such as the satyr like John the Baptist, the young nude men, the muscular Mary, the presence of St Joseph.

Much ink has been spilt over the centuries about the proper interpretation or interpretations of this work. Sometimes the commentary and argument overwhelm a proper appreciation of the painting. One can be diverted by all the theorising without properly looking at the painting and appeciating it.

The central figure of the painting is Mary. She is the subject of the piece.

Energetic and young. Contemplative and contented.

She is not like other Marys previously painted. She is athletic and bare-armed. She is not on a cloud or ethereal. She is quite firmly seated in the dirt.

She is what the Pagan Classical writers and the Old Testament looked forward to. The agent by which the Saviour became flesh.

Her Love for her child, the Saviour is emphasised. As is His love for her. The mutual looks between them lead to no other conclusion.

The Holy Family represents the new begining for mankind. A line has been drawn in human history. Nothing will ever be the same again. All that has gone before is simply that. History.

This, of course, does not eplain this very complex painting and in particular the presence and significance of the ignudi.

One complete and convincing interpretation is set out by Monsignor Timothy Verdon, in his book Mary in Western Art. (Hudson Hills, 2005) at pages 221ff.