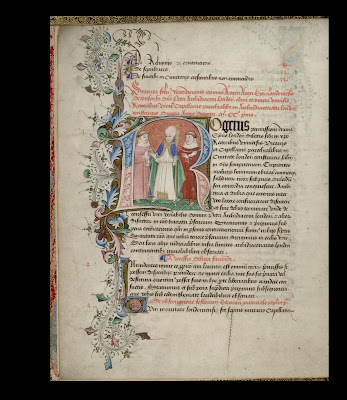 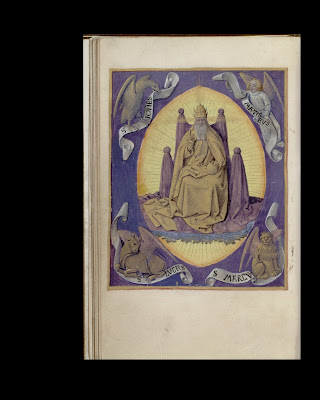 San Marino, Huntington Library, HM 1163, f. 13v
God the Father with symbols of the four Evangelists in the corners

Timothy Verdon is participating at the synod of bishops as an expert. He was born in New Jersey (USA) in 1946, and studied history of art at Yale University. He is a priest and art historian, professor at Stanford University and the director of Florence's diocesan office for catechesis through art since 1964.

On Sunday, October 12, 2008, "L'Osservatore Romano" published an article by the Father Verdon where he explains in artistic, liturgical, and theological terms the loss of meaning that the Sacred Scriptures have suffered in the modern and contemporary age.

An English translation of the article is published in Sandro Magister

Sandro Magister sees it as a development of Pope Benedict XVI`s lecture at the Collège des Bernardins, on September 12, 2008.

The importance of monastries and monasticism to the history and development of culture in Western Europe is discussed.

"In the history of Christianity, the cultural fruits of monasticism have not been limited to the monks, because the silence and withdrawn life of the monasteries, instead of keeping away the mass of the faithful, has attracted them, and monastic history confirms the fascination that monks have always raised in large segments of society.

Long before Alcuin taught or Anselm wrote, the citizens of Alexandria in Egypt went into the desert to listen to the abbot St. Anthony, and the Romans brought their children to St. Benedict. Even when the golden age of monastic culture began to fade, beginning in the 13th and 14th century, the ideal of a solitude filled with prayer would remain the paradigm for the active religious orders of the late Middle Ages, and for the laity to whom they preached.

It is not an exaggeration to say that the formal achievements of the monks – their art and architecture, their liturgical and devotional practices, their organizational structures and methods of education, agriculture, and trade – shaped the cultural awareness of Europe. Even more, monastic life itself, considered a creative and free decision, was deeply imprinted in the imagination of Christians, to the point that some of the most fundamental aspirations of our civilization can be interpreted only in the light of the monastic "enterprise."

The man or woman who gives up the legitimate goods of life, withdrawing in order to seek God in silence and prayer, needs a significant capacity of social and moral "imagination" in order to persevere in believing in "what eye has not seen, and ear has not heard, but God has prepared for those who love him" (1 Corinthians 2:9): this passage is, in fact, cited in the rule of St. Benedict ( 4:77). Above all in the sometimes problematic relationship with his confreres, in addition to the faith it is also the imagination that permits the monk to feel that "whatever you did for one of these least brothers of mine, you did for me" ( Matthew 25:40; cf. Regula 36:3).

By a similar act of imagination, those who do not enter the monastery have chosen, over centuries, to consider the monks "wise men" and "prophets" rather than dangerous dissidents at the margin of society. From the thousands of people who went to the abbot Anthony in the Egyptian desert, seeking a word, to the hundreds of thousands who today read Thomas Merton, Christians have believed that the solitude of the monks does not imply disdain for others, and that from their silence can emerge a wisdom at the service of man.

Moving in its simplicity, this trust suggests the most important function of monasticism in the imaginative life of Christians, that of a "symbol" that transmits sanctity to those who approach it. The visitors to a monastery, like the monks themselves, have the impression that, in the contemplative recollection of the cloister, places and things take on something of the intentionality and dedication of the inhabitants of those places.

The objects, even the humble ones, suddenly are perceived as signs that reveal the solidarity between man and the sacred, steps on the ladder reaching from earth to heaven. Precisely in this spirit, St. Benedict says that even the ordinary implements of the monastery must be treated as if they were sacred vessels for the liturgy (Regula 31:10).

This is a sacramental way of seeing, in which the surface of things becomes transparent in order to reveal an infinite perspective, granting power to images. A depiction of the Last Supper in a monastic refectory, like the one by Leonardo da Vinci at Santa Maria delle Grazie in Milan, is not only a decoration, but also a functional object that communicates and nourishes the faith from which it emerges.

The practical choices in the formal genesis of the work, which normally are part of the history of art, are interwoven here with other choices, not aesthetic, but existential."