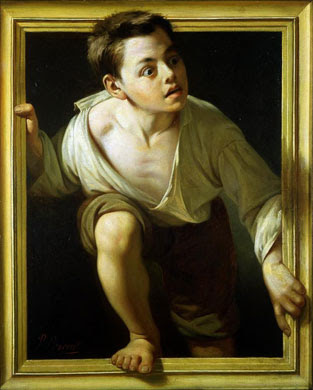 A celebrated example of a trompe l’oeil

A boy appears to be frantically leaping out of the captivity of his picture frame.

In advance of art criticism, this boy (the painting itself) appears to escape his (its) frame.

Pere Borrell del Caso was a painter of portraits and religious scenes. To an extent he was influenced by the Nazarenes. He founded a small academy in Barcelona.
Posted by Unknown at 8:46 pm