Chapel of Light: The church of Saint-Jean-Baptiste, Bourbourg 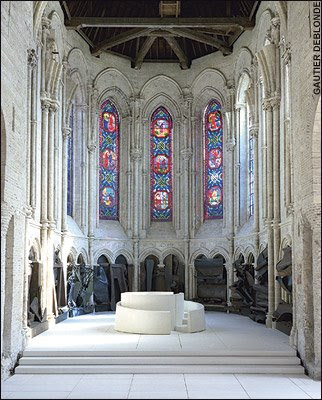 Font at The Chapel of Light with surrounding niche scultpures

In May 1940, the church of Saint-Jean-Baptiste, Bourbourg was hit by a German plane.

Most of the church was eventually repaired. However the Gothic choir was sealed off and lay unrepaired- until now.

In 1999, the British sculptor, Sir Anthony Caro was commissioned to restore the Choir.

The Daily Telegraph reports on the opening of the Chapel of Light which is:

"An extraordinary fusion of Gothic architecture and contemporary sculpture - of soaring stone arches, and monumental works in steel, wood and terracotta - it is the largest religious commission for a major artist in Europe since Matisse created the Chapelle du Rosaire in Vence on the French Riviera, between 1948 and 1951.

Its unveiling also marks the culmination of a nine-year struggle - a mini-war, if you like - between the forces of tradition and modernity that at one time threatened to inflict as damaging a blow to the project as a crashed German fighter.

Some 18 miles from Calais, Bourbourg is a sleepy town with a population of just 7,000, that seems to come to life only on market day, when the streets around the main square are clotted with stalls selling clothes and farm produce.

The church of Saint-Jean-Baptiste stands just off the square, the heart of the town. Its foundations date from Roman times, the choir from the 13th century, the nave from the 15th. There is a bell from 1548 that is said to be one of the most important in France."


"Caro's first thought was to create a series of sculptures that would reflect the region's history of conflict in both the First and Second World Wars. 'All the names that one drives by in this area are so extraordinary,' he says. 'Ypres, Armentières, Dunkirk… But the bishop wasn't terribly keen on the idea of doing anything about the wars. I think he felt they'd rather had enough of that.'

Inspiration arrived in the person of a Dominican priest, Fr Philippe Maillard, who visited Caro's studio early in the project. 'He said, well you've got the font there, why don't you do something to do with water?'

Responding to that idea, Caro has created a series of nine sculptures, collectively known as The Creation, which stand in the niches behind the font: The Deep, Sea Creatures, Galapagos, The Seashore, Watering Hole, Waterfall, In the Undergrowth, Beside the River and Fruits.
Posted by Unknown at 7:51 pm