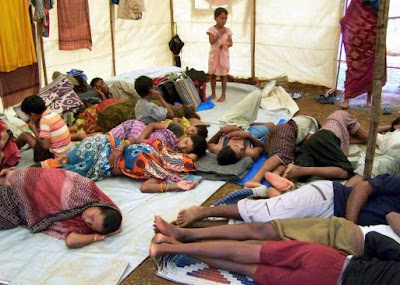 People sleep at Tikabali relief camp in Orissa (from The Hindu, India) 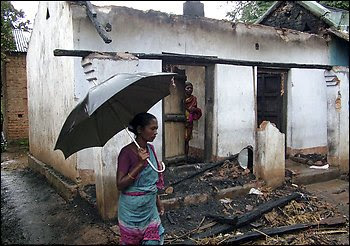 This house was burned during Hindu mob attacks in the eastern Indian state of Orissa. As many as 4,000 Christian homes in the region have been burned. (By Biswaranjan Rout -- Associated Press)
The Times in a welcome editorial castigates the Indian federal government its lack of effective action in not intervening in the state of Orissa.

There, since August 24, according to the Roman Catholic Church in India, 300 Christian villages have been destroyed in Orissa, 4,400 houses burnt, 50,000 people made homeless and 59 Christians killed and 18,000 injured. Churches and schools have been destroyed and in one particularly brutal attack a nun was seized and raped while local police stood by without intervening.

Churches have also been attacked in six other states, largely in the south, but even in Delhi Christians have been threatened.


"Delhi should crack down swiftly on the violence against Christians

For months, armed thugs in one state of eastern India have been burning churches, rampaging through villages and subjecting terrified Christians to forcible conversion to Hinduism. The violence has been instigated by nationalist Hindu groups that are targeting poor and weak Christian communities in a campaign aimed at halting conversions, driving out “alien” influences and reasserting the political supremacy of India's majority religion. ...

The violence is directly linked to Hindu nationalist groups determined to assert their power in the run-up to India's next general election, which must be held within the next seven months. Extremists have been steadily gaining power, with the oldest, the Rashtriya Swaytamsevak Sangh, (RSS) playing a shadowy role in rallying Hindu nationalist support behind its main political vehicle, the BJP party, the main national opposition to the ruling Congress-led coalition. Allied groups such as the VHP or Bajrang Dal preach the same intolerant message, with the ultimate aim of overthrowing India's secular Constitution and restricting or eliminating the rights of the large Muslim minority and of Christians, who account for 2.5 per cent of the population.

Despite the denunciations of Manmohan Singh, the Prime Minister, who called the Orissa violence a “national shame”, the federal Government has proved unwilling or unable to intervene. The state government, controlled by the BJP and its allies, has made little effort to halt the attacks, and local police are far from impartial. But Delhi is reluctant to impose presidential rule. And though middle-class Indians look with distaste at the quasi-fascist rallies and demagogic incitments of the RSS and its offshoots, a ban on their activities would be unworkable: the “Hindutva” movement is now so strong throughout India that it could easily sidestep restrictions.

But reasons are not excuses. The attacks on the Christians are a national disgrace, the more despicable because many were once lower-caste Hindus who changed their faith to escape a life of servitude and humiliation. Unless this persecution is quickly halted, its scale could grow and spread. The 2002 massacre of 2,000 Muslims in Gujarat exposed the ever-present danger of communal violence when exploited by demagogues.

Dr Singh should need no prompting from the Vatican or concerned Christian groups in the West. An effective federal police force should be sent to Orissa and swiftly deployed. Instigators should be arrested and curfews imposed. And all India should resist this attempt to destroy the very basis of its polity and prosperity: its democracy and diversity. Without tolerance, both count for little"
Posted by Unknown at 2:00 pm