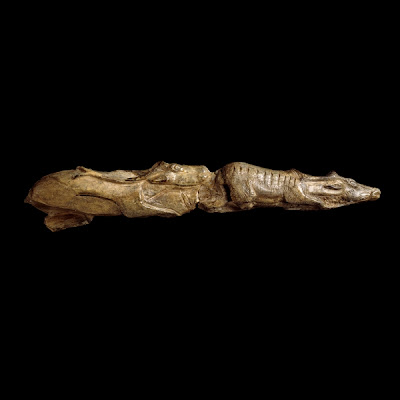 "This is one of the most beautiful pieces of Stone Age art ever found. It shows two reindeer, one behind the other. The figure in front is a female with smaller body and antlers. Her coat is delicately shaded. The larger male figure is not shaded but his strong body is clearly carved. On both animals the antlers are laid along the back and the legs are folded underneath, with the exception of the back left leg of the male which originally extended behind. The sex of each animal is clearly shown.

With their noses up and antlers back the carving appears to show the reindeer swimming. Other swimming reindeer are known, for example in a painted frieze in the cave of Lascaux. The tapering shape of the mammoth tusk may also have decided the shape of the animals, which are perfectly modelled from all angles."