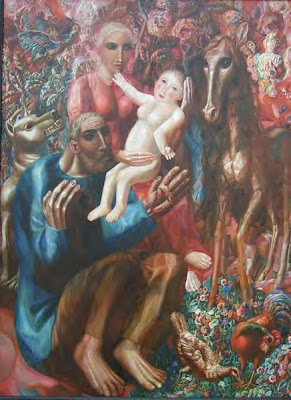 In 1929, a large retrospective exhibition of Filonov art was planned at the Russian Museum; however, the Soviet government forbade the exhibition from going forward.

From 1932 onward, Filonov literally starved but still refused to sell his works to private collectors. He wanted to give all his works to the Russian Museum as a gift so as to start a Museum of Analytical Realism.

He died of starvation on December 3, 1941 during the Siege of Leningrad.

Most of Filonov's works were saved by his sister Yevdokiya Nikolayevna Glebova. She stored the paintings in the Russian Museum's archives and eventually donated them as a gift.

Exhibitions of Filonov's work were forbidden.
Posted by Unknown at 6:12 am