The Longest Night: The Shortest Day 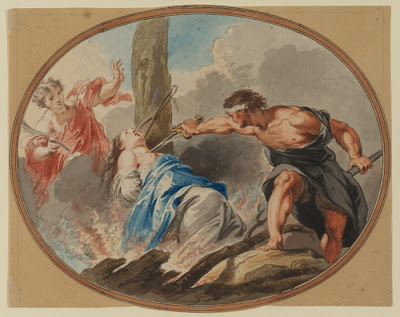 Today is the Feast day of St Lucy of Syracuse. It is the shortest day of the year: also the longest night.

Saint Lucy of Syracuse, also known as Saint Lucia, Santa Lucia, or Saint Lukia, (traditional dates 283-304) was a rich young Christian martyr who is venerated as a saint by Catholic and Orthodox Christians.

All that is really known for certain is that she was a martyr in Syracuse in Diocletian's persecutions of A.D. 304. Her veneration spread to Rome, so that by the 6th century the whole Church recognized her courage in defence of the faith.

In medieval accounts, St. Lucy's eyes are gouged out prior to her execution.

In art, her eyes sometimes appear on a plate that she's holding.

A NOCTURNAL UPON ST. LUCY'S DAY,
BEING THE SHORTEST DAY.


'TIS the year's midnight, and it is the day's,
Lucy's, who scarce seven hours herself unmasks ;
The sun is spent, and now his flasks
Send forth light squibs, no constant rays ;
The world's whole sap is sunk ;
The general balm th' hydroptic earth hath drunk,
Whither, as to the bed's-feet, life is shrunk,
Dead and interr'd ; yet all these seem to laugh,
Compared with me, who am their epitaph.

Study me then, you who shall lovers be
At the next world, that is, at the next spring ;
For I am every dead thing,
In whom Love wrought new alchemy.
For his art did express
A quintessence even from nothingness,
From dull privations, and lean emptiness ;
He ruin'd me, and I am re-begot
Of absence, darkness, death—things which are not.

All others, from all things, draw all that's good,
Life, soul, form, spirit, whence they being have ;
I, by Love's limbec, am the grave
Of all, that's nothing. Oft a flood
Have we two wept, and so
Drown'd the whole world, us two ; oft did we grow,
To be two chaoses, when we did show
Care to aught else ; and often absences
Withdrew our souls, and made us carcasses.

But I am by her death—which word wrongs her—
Of the first nothing the elixir grown ;
Were I a man, that I were one
I needs must know ; I should prefer,
If I were any beast,
Some ends, some means ; yea plants, yea stones detest,
And love ; all, all some properties invest.
If I an ordinary nothing were,
As shadow, a light, and body must be here.

But I am none ; nor will my sun renew.
You lovers, for whose sake the lesser sun
At this time to the Goat is run
To fetch new lust, and give it you,
Enjoy your summer all,
Since she enjoys her long night's festival.
Let me prepare towards her, and let me call
This hour her vigil, and her eve, since this
Both the year's and the day's deep midnight is.
Posted by Unknown at 8:04 pm