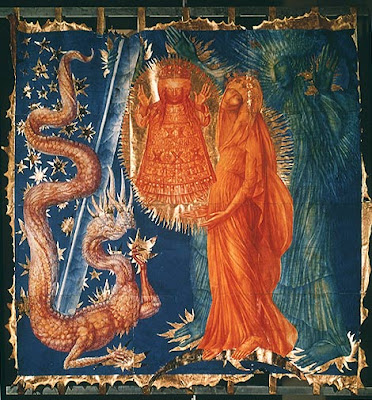 Ernst Fuchs (born February 13, 1930) is an Austrian visionary painter, draftsman, printmaker, sculptor, architect, stage designer, composer, poet, singer and one of the founders of the Vienna School of Fantastic Realism.

In 1956 he converted to Roman Catholicism (his mother had had him baptised during the war in order to save him from being sent to a concentration camp).

In 1957 he entered the Dormition Abbey on Mount Zion where he began work on his monumental Last Supper and devoted himself to producing small sized paintings on religious themes such as Moses and the Burning Bush, culminating in a commission to paint three altar paintings on parchment, the cycle of the Mysteries of the Holy Rosary (1958-61), for the Rosenkranzkirche in Hetzendorf, Vienna.

He also deals with contemporary issues in his masterpiece of this period, Psalm 69 (1949-60).