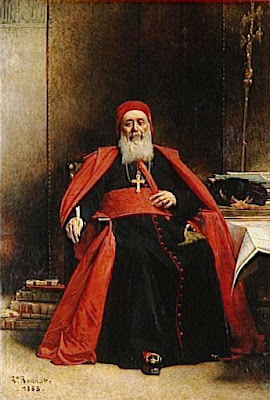 Charles Martial Allemand Lavigerie (31 October 1825–26 November 1892) was a French cardinal, archbishop of Carthage and Algiers and primate of Africa.

In 1856, he accepted the direction of the schools of the East, and was thus for the first time brought into contact with the Islamic world.

Activity in missionary work, especially in alleviating the distresses of the victims of the Druzes, soon brought him prominently into notice.

Lavigerie landed in Africa on the 11th of May 1868, when the great famine was already making itself felt, and he began in November to collect the orphans into villages

In 1874 he founded the Sahara and Sudan mission, and sent missionaries to Tunis, Tripoli, East Africa and the Congo. The order of African missionaries thus founded, for which Lavigerie himself drew up the rule, has since then become famous under various translations of the French Pères Blancs or White Fathers, after the white Arab dress they wore.

Their official name is La Société de Missionnaires d'Afrique (Society of Missionaries for Africa).
Posted by Unknown at 7:40 pm