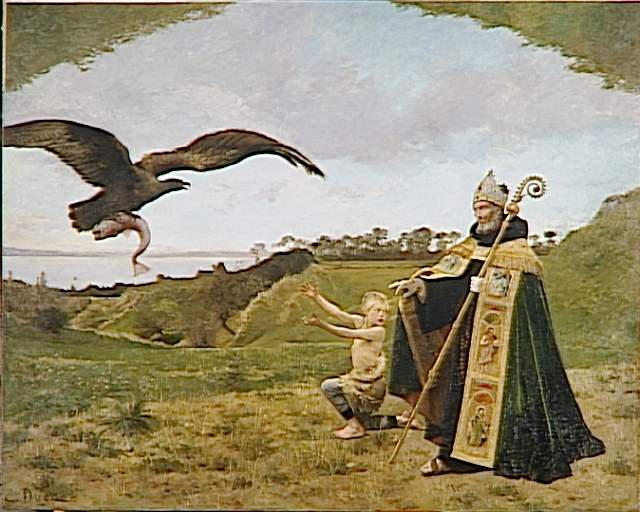 St Cuthbert is being fed by an eagle.

St Cuthbert of Lindisfarne (c. 634–20 March 687) was an Anglo-Saxon monk and bishop in the Kingdom of Northumbria.He became one of the most important medieval saints of England, with widespread recognition in the places he had been in Scotland.

In 676 he adopted the solitary life and retired to a cave. After a time he settled on one of the Farne Islands, south of Lindisfarne, and gave himself more and more to austerities

While on the Farne Islands, he instituted special laws to protect the Eider ducks and other seabirds nesting on the islands

In 684, Cuthbert was elected bishop of Lindisfarne, at a synod at Twyford but was reluctant to leave his retirement and take up his charge. After Christmas, 686, however, he returned to his cell on Inner Farne Island (two miles from Bamburgh, Northumberland), which was where he eventually died.

He was buried at Lindisfarne but eventually the body was transferred to Durham.


Duez was a friend of John Sargent who painted his portrait (now in New Jersey).

Duez was most famous for his landscapes and would never stop painting those, however, he would also have periods where he would concentrated on portraiture or on genre paintings.
Posted by Unknown at 10:57 pm