Resting on the Flight to Egypt 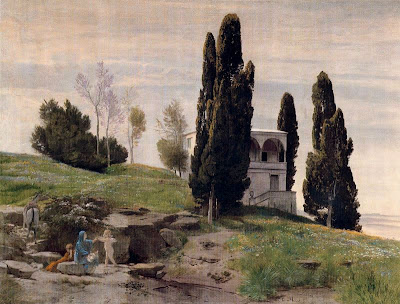 Böcklin was a symbolist Swiss painter.

His allegorical and fantastical paintings, many based on mythical creatures, anticipated 20th-century surrealism

In 1848, when he was in Paris, he was caught up in the confusion of the February Revolution.

The following years he spent in Rome, and it was in the mid-1850s that the first mythological figures featured in his Roman landscape.

At the age of twenty-five, during one of his stays in Rome, he had married the daughter of a pontifical guard who bore him eleven children between 1855 and 1876

Böcklin was an energetic figure devoid of the languid melancholy of 'decadence'.
Posted by Unknown at 9:36 pm