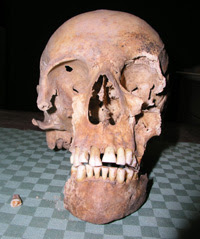 Archaeologists have successfully identified the remains of six medieval bishops of Whithorn who died between 1200-1360.

The bones had been discovered during the 1957-67 excavation at Whithorn Priory but who they belonged to was a mystery.

The bishops were in an especially holy area between the high altar and the shrine of St Ninian – the man credited with bringing Christianity to what later became Scotland.

Analysis also showed that Bishop Henry had been suffering from tooth abcesses.

One of the most impressive finds from the excavation was of a gilded and enamelled crozier head of a type that dates from around 1175.

The grave also contained brocade threads from vestments, gilded sequins from his headdress, and silver altar vessels. This has now been identified as the grave of bishop Simon (died 1355), meaning the crozier was an antique when buried.

The central grave was being used for a second time and had originally been the burial place of bishop John (d. 1209).

The bones had been discovered during the 1957-67 excavation at Whithorn Priory but who they belonged to was a mystery - until now.

Keeping the finds in storage, to minimise deterioration, kept them safe while research techniques advanced and may mean that future archaeologists will be able to learn even more from them.

However one does wonder if the remains of the bishops should now be buried or should they still be kept in storage ?

St. Ninian is a shadowy figure in history. He is acknowledged as Scotland's first saint with the date AD 397 celebrated as the beginning of his mission to his people.

Whithorn is the home of the earliest recorded Christian community in Scotland and was the episcopal seat of Bishop Ninian, the apostle of the southern Picts.

Northumbrians established a bishopric at Whithorn in about 730 AD and set about building this next, more substantial, church incorporating not only the pillars of the shrine, but also the steps leading to it.

Later the church was divided into two and the East part became a burial chapel. Evidence of stained glass indicates that it was an important building.

Whithorn became an ecclesiastical burgh in about 1307 and was totally re-built as a Cathedral.

The town grew in size and importance, especially around the 1500's.

During the reformation, in 1581, pilgrimage was banned in Scotland and Whithorn transformed from a centre of national importance into a small country town


For more details of the identification of the Bishops` remains, see Historic Scotland

For brief articles on what is known of the lives of the various bishops "re-discovered" see The Wikipeda article on Bishop of Galloway and follow the links for each of the bishops.
Posted by Unknown at 6:56 pm