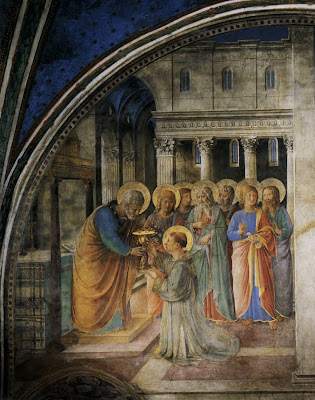 Stephen was a deacon in the early Christian Church. The apostles had found that they needed helpers to look after the care of the widows and the poor. So they ordained seven deacons, and Stephen is the most famous of these

He was the first Christian martyr.

Stoned outside Jerusalem, he died praying for his executioners. The mob was encouraged by Saul of Tarsus, the future Saint Paul: "And Saul entirely approved of putting him to death".

The only first hand source of information on the life and death of St. Stephen is the Acts of the Apostles (6:1-8:2).

The above scene comes from Fra Angelico`s last important works, frescoes for the chapel of Pope Nicholas in the Vatican. The Scenes from the Lives of Saints Stephen and Lawrence (1447-1449), are probably partly painted from his designs by assistants.
Posted by Unknown at 12:28 pm