Eakins` Portraits of Clergy in America 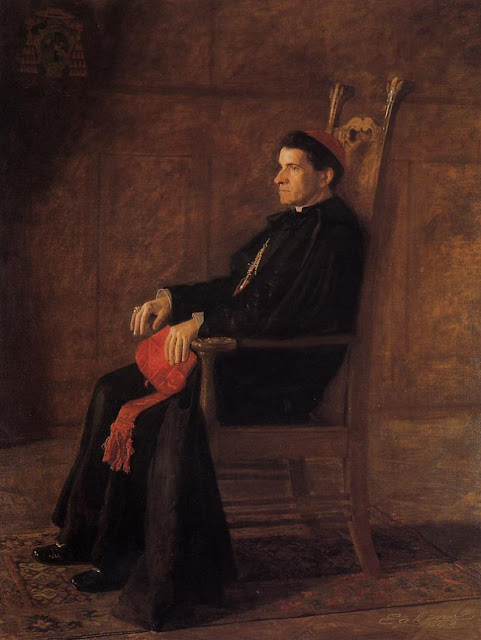 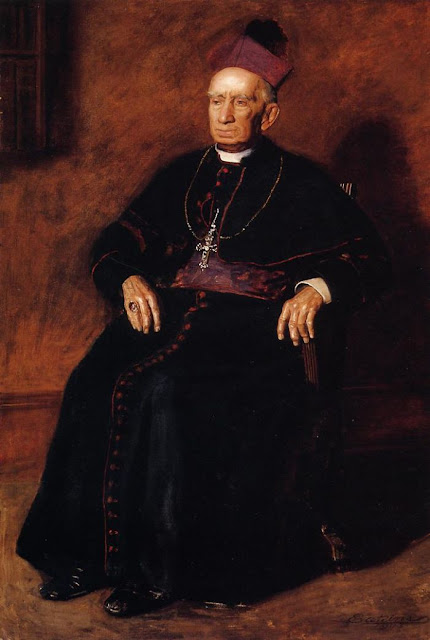 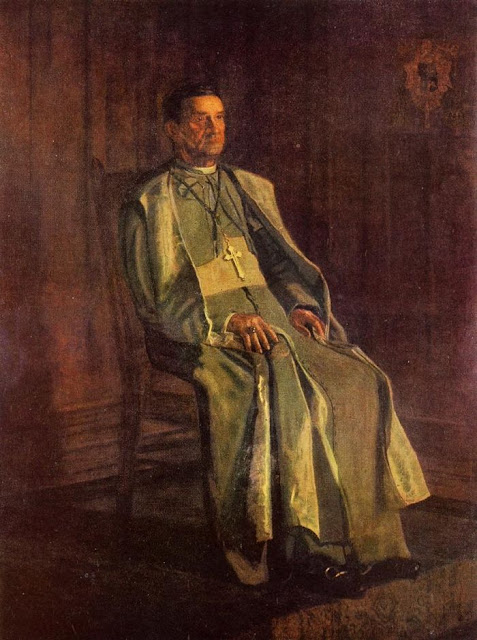 
Thomas Cowperthwait Eakins (July 25, 1844 – June 25, 1916) was one of the greatest American painters of his time, an innovating teacher, and an uncompromising realist.

In his time, however, the artist from Philadelphia suffered neglect which he did not merit.

For Eakins, portraiture held little interest as a means of fashionable idealisation or even simple verisimilitude. It provided the opportunity to reveal the character of an individual through the modeling of a solid anatomical form.

The known number of Eakins's portraits is 247, including the only one he ever painted of himself, and they vary in scale from intimate to grand, his subjects either sitting or standing.

His art is unfussy, blunt, direct. He preferred to explore the truth of what he saw, which is not to say that he did not discover beauty or dignity in his contemplation. A critic observed that Eakins was an "annihilator of vanity". Many clients complained that he made them look older than they were. In fact, Eakins painted very slowly and tended not to talk much while painting; this often lulled his sitters into a meditative repose, bereft of the rejuvenating sparkle that full attention brings.

One Philadelphia gentleman joked, Eakins “would bring out all the traits of my character that I had been trying to hide from the public for years.”

All this made Eakins a specialty taste.

"I never knew but one artist who could resist the temptation to see things as they ought to be, rather than as they are, and that's Tom Eakins.", his friend,Walt Whitman, said of him.

In 1900, he became acquainted with several Roman Catholic clergymen at the St. Charles Borromeo Seminary in the Philadelphia suburb of Overbrook. The year before he met the clerics, his father had died. Eakins himself was an agnostic, but in the intellectual companionship and quiet monastic atmosphere of the seminary, he found inspiration.

Sundays, he and a young protege named Samuel Murray would ride their bicycles out to St. Charles, spend the day chatting with the priests. He eagerly seized the opportunity to portray four clerics as well as a prominent Catholic layman.

Not all of the clerics liked what he saw. The rector of St. Charles, Patrick Garvey, remembered today as a "stern, quarrelsome but good-looking man," concealed his picture under the bed.

To criticisms of Eakins' portrayal, Whitman retorted: "It is likely to be only the unusual person who can enjoy such a picture—only here and there one who can weigh and measure it according to its own philosophy. Eakins would not be appreciated by ... professional elects: the people who like Eakins best are the people who have no art prejudices to interpose."

In 1902, he painted a “Portrait of the Rt. Rev. John J. Fedigan, 1902,” which he described as "a major work" He painted it for the Augustinian Order at what was then Villanova College and is still in the possession of Villanova University today. The large work measures nearly 8' x 4' feet.

For this masterwork and its history, see Eakins’ Little-Known Treasure in Villanova Magazine (Spring 2007) (.pdf file)


Sebastiano Cardinal Martinelli (20 August 1848 - 4 July 1918) was a Cardinal of the Roman Catholic Church and was former Prefect of the Congregation of Rites.

Sebastiano Martinelli was born in Borgo Sant'Anna within the Archdiocese of Lucca, Italy.

He was ordained on 4 March 1871 in Rome. He served as a Professor of theology at the Collegio "Santa Maria in Pusterula", Rome. Named postulator causarum servorum Dei of the Augustinian order in 1881. He was Prior general of his Order in 1889 and was reelected in 1895. He was appointed as apostolic delegate to the United States on 18 April 1896 by Pope Leo XIII.

He was created and proclaimed Cardinal-Priest of S. Agostino by Pope Leo XIII on 15 April 1901.

He participated in conclave of 1903 that elected Pope Pius X.

He served alongside Pietro Cardinal Gasparri as a member of the commission for the codification of canon law between 1906 and 1917.

The portrait is an astonishingly solitary portrait of the Cardinal. One cannot but stare into its disturbing brown abyss.

Archbishop Diomede Falconio was the Italian-born Apostolic Delegate to the United States. He posed for Eakins in Washington, D.C., where he resided at the Catholic University of America. As a poor Franciscan friar, he normally shunned the impressive gray silk robes that he wears here.

For unknown reasons, the canvas is unfinished. The face and hands appear completed, but the vestments, chair, carpet, and wall paneling have not received their final details.

The church scholar, at age sixty-three, was only two years older than the painter