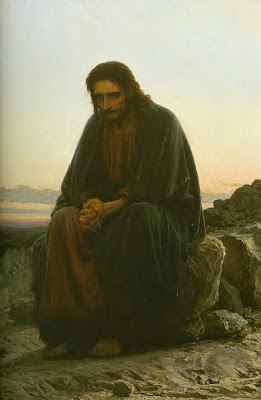 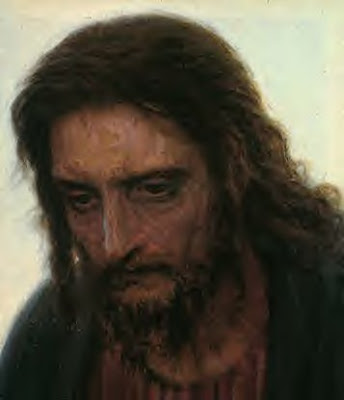 A heated debate developed regarding Kramskoy's Christ in the Wilderness, a work that resolutely eschews all divine attributes.

This painting was the uncontested crowd-puller at the second Peredvizhniki ("Itinerants") exhibition in 1872, held in St. Petersburg, Moscow, and various other Russian cities.

At daybreak in a stony wilderness, an overtired, slightly hunched Christ squats on a boulder, his sinewy hands pressed tightly together in prayer. His puffy eyes gaze blankly at the ground in front of him. Outwardly, this wanderer-in-the-wilderness has a faintly wild look about him. His hair is unkempt, his thin beard frayed. His shabby clothes, a wine-red tunic with blue wrap, seem already faded and worn. The sombre form of Christ, anything but a glowing presence, sits with his back to the sunrise. This brooding figure appears fossilised, like a boulder in the landscape. A cold, pinkish morning light, accompanied by pale blue bands of cloud, appears at the horizon.

The young writer Vsevolod Garshin observed in the figure of Christ an inner composure: "the expression of enormous moral strength, the hatred of evil, and a radical determination to declare war on it."

The artist repeatedly stressed the impulse that led to his Christ in the Wilderness. "The image had stood before me continually for five years. I had to paint it, in order to be rid of it. During work on the painting, I mused, prayed, and suffered a great deal (to put it rather pompously)." Kramskoy confessed to his friend, the landscape painter Fedor Vasiliev, that he repeatedly asked himself whether he was at all capable of depicting Christ: "I have perhaps committed sacrilege, but I couldn't help but paint him. I couldn't, if you like, not do it. I can say that I painted him with blood and tears."

Kramskoy described his Christ in a letter to Vasilev in his own words: "At daybreak he sits tired, tormented, and careworn amongst the stones, cold stones. His hands are convulsive and pressed together tightly, very tightly; the fingers press into the flesh, the feet are sore, the head bowed. He has been deep in thought and has been praying for a long time, so long that his lips are as if stuck together…."

Kramskoy later reported to the critic Alexander Chirkin, one day he had seen the figure in his painting in real life before him: "I suddenly stumbled upon him, just like that at daybreak; just like that he sat there, the hands clasped together, with bowed head, his mouth almost faded away from long remaining silent. He did not notice me." Kramskoy was so struck by this figure that he felt compelled to paint it. He wrote in the same letter to Chirkin: "Nothing in the painting is contrived. I saw everything together just like that. By chance the whole scene was exactly the same."

A few years later, the artist returned once more to this encounter. In a letter to the writer Garshin, he again described this extraordinary experience. He claimed to have seen in the stranger who appeared before him an uncanny physical force, "the force to smash everything to pieces," as well as a character capable of "subduing the entire world," but having "decided not to do so."

The artist never broke with the Russian Orthodox Church. He collaborated on a number of commissions for the church, such as the decoration of the Cathedral of Christ the Redeemer in Moscow, which he worked on sporadically from 1863 to 1873.
Posted by Unknown at 12:57 am