Our Lady- Tenderness of Cruel Hearts 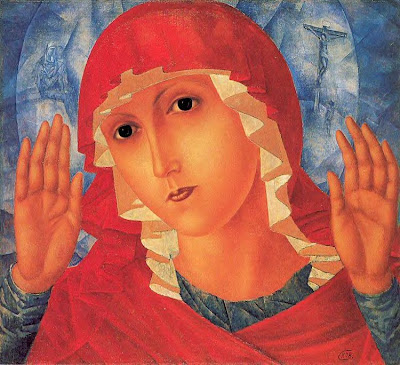 In the late 1910s he developed and wrote about a new theory concerning the depiction of space. His so-called ‘spherical perspective’ differs from the traditional ‘Italian’ perspective.

The artist creates different spaces on the canvas, connected by gravity; bent axes of bodies make up a ‘fan’, which is opening from within the picture. Paintings with such compositional structure should be viewed by a moving spectator from different points,

The work of Petrov-Vodkin did not fit with the Soviet ideology of the Stalin's period and after his death in 1939 the painter was quickly ‘forgotten’, happily not for long.
Posted by Unknown at 3:14 am