Spe Salvi: A Digression on Slavery ? 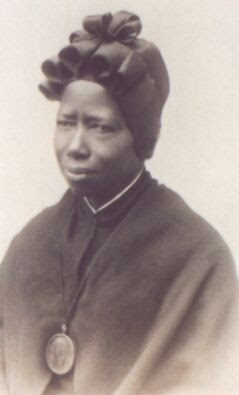 On the day before he issued his Encyclical Spe Salvi, the Pope replied to an open letter sent by 138 Muslim scholars to Benedict XVI and Christian leaders. For the text of his reply,see here in Zenit. The text repeatedly refers to the need for dialogue on the basis of mutual tolerance and respect.

It is noteworthy and perhaps not without coincidence, that in his Encyclical, the Pope makes more than a passing reference to Sudan and the institution of slavery.

In Spe Salvi, Pope Benedict uses the example of Saint Josephine Bakhita to illustrate what is meant by Christian "hope". He says:

"[A]t this point a question arises: in what does this hope consist which, as hope, is “redemption”?

The essence of the answer is given in the phrase from the Letter to the Ephesians quoted above: the Ephesians, before their encounter with Christ, were without hope because they were “without God in the world”. To come to know God—the true God—means to receive hope. We who have always lived with the Christian concept of God, and have grown accustomed to it, have almost ceased to notice that we possess the hope that ensues from a real encounter with this God.

The example of a saint of our time can to some degree help us understand what it means to have a real encounter with this God for the first time. I am thinking of the African Josephine Bakhita, canonized by Pope John Paul II. She was born around 1869—she herself did not know the precise date—in Darfur in Sudan. At the age of nine, she was kidnapped by slave-traders, beaten till she bled, and sold five times in the slave-markets of Sudan. Eventually she found herself working as a slave for the mother and the wife of a general, and there she was flogged every day till she bled; as a result of this she bore 144 scars throughout her life.

Finally, in 1882, she was bought by an Italian merchant for the Italian consul Callisto Legnani, who returned to Italy as the Mahdists advanced.
Here, after the terrifying “masters” who had owned her up to that point, Bakhita came to know a totally different kind of “master”—in Venetian dialect, which she was now learning, she used the name “paron” for the living God, the God of Jesus Christ. Up to that time she had known only masters who despised and maltreated her, or at best considered her a useful slave. Now, however, she heard that there is a “paron” above all masters, the Lord of all lords, and that this Lord is good, goodness in person. She came to know that this Lord even knew her, that he had created her—that he actually loved her. She too was loved, and by none other than the supreme “Paron”, before whom all other masters are themselves no more than lowly servants. She was known and loved and she was awaited. What is more, this master had himself accepted the destiny of being flogged and now he was waiting for her “at the Father's right hand”. Now she had “hope” —no longer simply the modest hope of finding masters who would be less cruel, but the great hope: “I am definitively loved and whatever happens to me—I am awaited by this Love. And so my life is good.”

Through the knowledge of this hope she was “redeemed”, no longer a slave, but a free child of God. She understood what Paul meant when he reminded the Ephesians that previously they were without hope and without God in the world—without hope because without God. Hence, when she was about to be taken back to Sudan, Bakhita refused; she did not wish to be separated again from her “Paron”.

On 9 January 1890, she was baptized and confirmed and received her first Holy Communion from the hands of the Patriarch of Venice. On 8 December 1896, in Verona, she took her vows in the Congregation of the Canossian Sisters and from that time onwards, besides her work in the sacristy and in the porter's lodge at the convent, she made several journeys round Italy in order to promote the missions: the liberation that she had received through her encounter with the God of Jesus Christ, she felt she had to extend, it had to be handed on to others, to the greatest possible number of people.

The hope born in her which had “redeemed” her she could not keep to herself; this hope had to reach many, to reach everybody.
...
We have raised the question: can our encounter with the God who in Christ has shown us his face and opened his heart be for us too not just “informative” but “performative”—that is to say, can it change our lives, so that we know we are redeemed through the hope that it expresses?

Before attempting to answer the question, let us return once more to the early Church. It is not difficult to realize that the experience of the African slave-girl Bakhita was also the experience of many in the period of nascent Christianity who were beaten and condemned to slavery. Christianity did not bring a message of social revolution like that of the ill-fated Spartacus, whose struggle led to so much bloodshed. Jesus was not Spartacus, he was not engaged in a fight for political liberation like Barabbas or Bar- Kochba. Jesus, who himself died on the Cross, brought something totally different: an encounter with the Lord of all lords, an encounter with the living God and thus an encounter with a hope stronger than the sufferings of slavery, a hope which therefore transformed life and the world from within.

What was new here can be seen with the utmost clarity in Saint Paul's Letter to Philemon. This is a very personal letter, which Paul wrote from prison and entrusted to the runaway slave Onesimus for his master, Philemon. Yes, Paul is sending the slave back to the master from whom he had fled, not ordering but asking: “I appeal to you for my child ... whose father I have become in my imprisonment ... I am sending him back to you, sending my very heart ... perhaps this is why he was parted from you for a while, that you might have him back for ever, no longer as a slave but more than a slave, as a beloved brother ...” (Philem 10-16). Those who, as far as their civil status is concerned, stand in relation to one an other as masters and slaves, inasmuch as they are members of the one Church have become brothers and sisters—this is how Christians addressed one another.

By virtue of their Baptism they had been reborn, they had been given to drink of the same Spirit and they received the Body of the Lord together, alongside one another. Even if external structures remained unaltered, this changed society from within. When the Letter to the Hebrews says that Christians here on earth do not have a permanent homeland, but seek one which lies in the future (cf. Heb 11:13-16; Phil 3:20), this does not mean for one moment that they live only for the future: present society is recognized by Christians as an exile; they belong to a new society which is the goal of their common pilgrimage and which is anticipated in the course of that pilgrimage."

The story of the saint is perhaps not as well known as it should be.

For more about the saint and the devotion she inspires, see

As regards the appalling situation in the Sudan and in particular Darfur, and the institution of slavery there see

The Society of Missionaries of Africa ("The White Fathers")

Sudan - The Darfur Conflict - The Sudan (in pdf format)