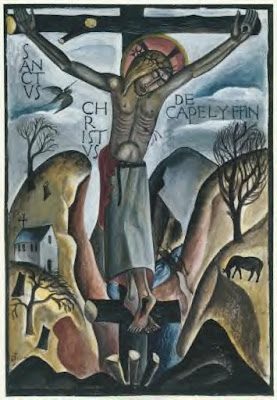 Capel-y-ffin was the former monastery in the Monmouthshire Black Mountains where Eric Gill and his family moved in August 1924.

David Jones first visited them there the following December, and the building at the left of this drawing loosely resembles the monastery, in its winter landscape.

It is similar to a wall painting of the Crucifixion made by David Jones at Capel-y-ffin in the same winter.

David Jones CH (1 November 1895 – 28 October 1974) was both an artist and one of the most important first generation British modernist poets.

His work was formed by his Welsh heritage and his Catholicism.

For more information about Jones and his output, seeWikipedia article and the links referred to in the article
Posted by Unknown at 10:57 am