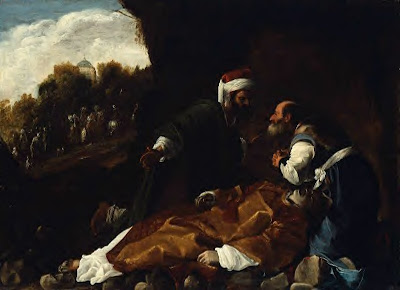 The painting was originally commissioned by Cardinal Giacomo Sannesi, (1551-1621) possibly for Sannesi chapel in San Silvestro al Quirinale where the cardinal is buried.

The cardinal participated in the conclaves of 1605 (the latter of which elected Pope Paul V) and 1621.He was protonotary apostolic and also was Camerlengo of the Sacred College of Cardinals, January 13, 1620 to January 11, 1621.

The Cardinal was a noted collector and purchased Caravaggio's Conversion of St Paul after it was rejected for the Cerasi Chapel.
Posted by Unknown at 1:30 pm