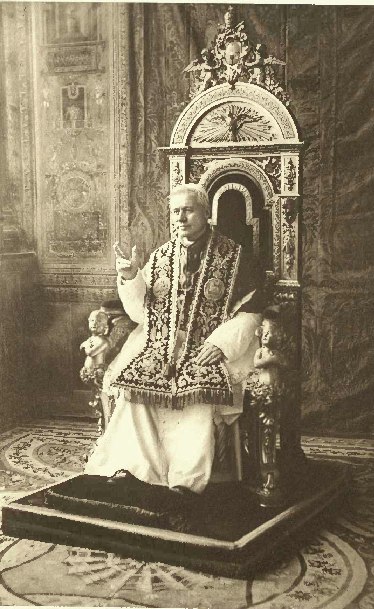 We are soon coming up to the feast day of Saint Pope Pius X.

A large crowd attended the ceremony. More than 70,000 people attended.

The Pope had issued strict orders that no demonstration such as cheering was to be allowed. It was found very difficult to prevent it, and every now and then the people in their enthusiasm were unable to control themselves. During the procession the Pope on several occasions paused while he was blessing the crowd right and left, and putting his fingers to his lips enjoined silence.

The Mass commenced about 10.30am , and was sung by the Pope at the High Altar. The last Coronation Mass that was celebrated there was that of Pius IX., on June 21st, 1846.

"The Altar to-day looked magnificent. In front of it were placed two standard candlesticks designed by Pollaiuolo. On it were arranged the seven candlesticks designed by Gentili and Spagna, two statues of SS. Peter and Paul on either side the Cross, and two mitres and tiaras, the former on the Gospel side and the latter on that of the Epistle. The antependia of the Altar were those presented by Pope Clement XIII., of the family of Rezzonico of Venice (1758-69), and whose coat of arms I recognised as embroidered on them. ...

The Kyrie, Gloria, and Sanctus and Agnus Dei were by Palestrina, " Sine nomine" for four voices. The Credo was from the Mass of Pope Marcellus, the Offertory that of " Clemens non Papa," the Motett " Orenius pro Pontifice nostro Pio" for eight voices, was by Perosi, and the Communio was by Palestrina."

One of those present with a particularly good view of proceedings was Hartwell de la Garde Grissell (1839-1907). He was an Englishman and one of the two Chamberlains of Honour in waiting on the Pope at the Coronation. Exactly a year earlier, he had been Gold Staff Officer at the Coronation of King Edward VII in Westminster Abbey.

He wrote an account of the proceedings in 1903. It is entitled: Sede vacante : being a diary written during the conclave of 1903, with additional notes on the accession and coronation of Pius X.
Students of liturgy and ceremonial might be interested to download the book from here.


One of those present that day with a minor part in the ceremonial was a young seminarian. The seminarian was ordained the next year. Many years later, he publicly recalled the events of that day.

In his Apostolic Exhortation to the Bishop and Clergy of Venice on the occasion of the 45th Anniversary of the Death of Saint Pope Pius X and the brief return of the Remains of the Saint to Venice (21st April 1959), Blessed Pope John XXII wrote about Pope Pius X and amongst other matters, the day of his coronation.

He said that on the day of the Coronation, Pope Pius X appeared irritated and annoyed by the cheering and acclamation of the huge crowd. Pope John said that this was an important sign of his mindset and character.

He recalled the slowness and shortness of the blessing by the Pope. He also recalled the redness of the Pope`s eyes caused by his tears, and his smile slow to come but once come, clear and genuine. All signs of the internal discipline of the man

In the Exhortation, Pope John also recalled that as a youth of 15 years of age, he had listened to the then Patriarch of Venice Sarto as he preached persuasively in a strong and clear voice at Sant'Alessandro in Colonna in Bergamo.

He praised the character and Pontificate of Pope Pius X.

He cited his huge popularity. Why was he so popular ? Pope John said:

He transcended class. In him was a concatenation of the best virtues and characteristics of all men, which appealed to everyone.

Interestingly Pope John XXIII also went on to praise and commend to the clergy the exhortation of Pius X entitled "Haerent animo", which was written by Pius X on the 50th anniversary of his ordination.
Posted by Unknown at 9:52 am