Rome and A Tale of Two Artists 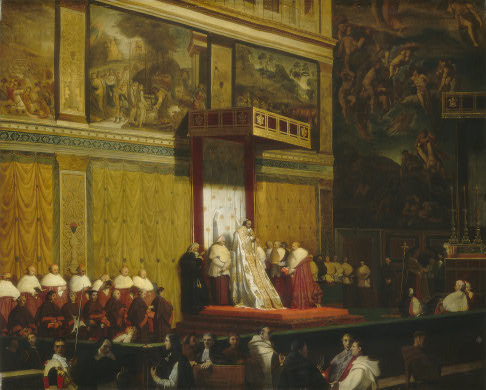 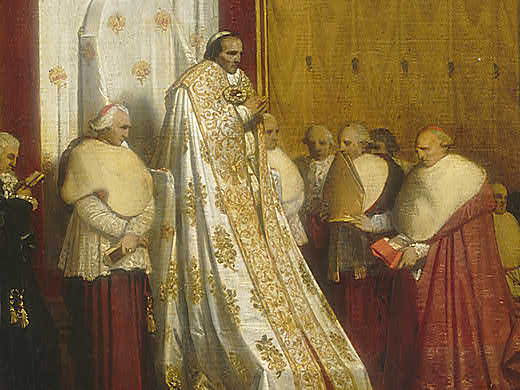 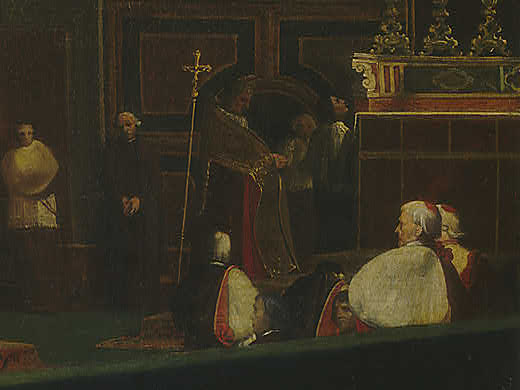 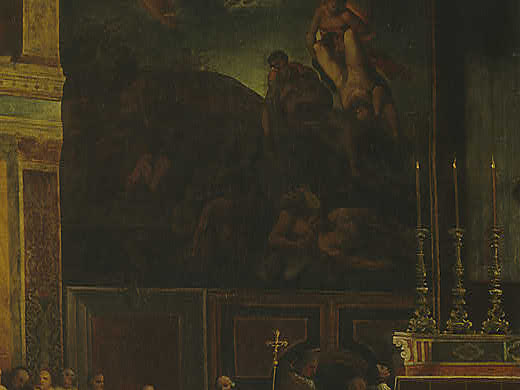 
While this painting was being painted by Ingres, the pope was being held prisoner in France after having been removed from Rome by French forces following Napoleon's annexation of the Papal States.

When the painting was exhibited in Paris, the Pope was released and back in Rome.

Unlike his teacher, David, Ingres did not involve himself in politics

A self -portrait of Ingres is on the left. He holds a halberd.

In 1806 Ingres was sent by the French Academy to Rome. He used the four years of his stay to study the work of the Renaissance masters, Raphael above all, but he was also influenced by medieval and Byzantine art.

Six months after he arrived in Rome Ingres wrote to his father-in-law, M. Forrestier. He was enchanted by the Sistine Chapel and the works in it. But it was the music and the liturgy which seem to have made the deepest impression. He wrote:
"

"I will tell you however in regard to pleasures that I have spent Holy Week in the Sistine Chapel and the Easter holidays in St. Peter, which is like the temple of Solomon.


The Sistine Chapel is dedicated solely to the Holy Week and to the conclave.

It is enriched by the sublime masterpiece of Michelangelo, The Last Judgment, and he also painted the ceiling, and the rest is covered with beautiful paintings by Perugino and other great masters of the Renaissance.

Nothing is more impressive than all these ceremonies, than the Pope, this good and venerable man presiding, and all the cardinals. I cannot tell you enough how it is beautiful, rich and simple all at once, but what I had never heard in my life was music like the Miserere, which is sung on three consecutive days, or, rather, that is exhaled in celestial and divine songs that penetrate the soul and moisten the eyes.

These are verses sung in a harmony of voices, for bear in mind that the Pope never has other instruments to his music. It's his earmark and he does not lose thereby, I assure you.

Before the Miserere the Lamentations are also sung; it is in fact an earthbound song that is the epitome of melancholy and lament. This piece is, to my taste, at least as good and is perhaps by nature more effective than the other; I'm crazy about it and will send it to you annotated by my first.

Mr. Gasse wrote it. You will see that it is nothing much, but just imagine a heavenly voice, all alone and that hurts like the harmonica, as it flows and passes imperceptibly from one tone to another.

Finally, at nightfall, the plainsong service ended, the Pope descends from his seat, he prostrates himself, a great silence prepares and announces the heavenly beginning of these voices that begin the Miserere.

Everything in this moment is in accordance with this music: no lights, daylight fades and just allows a glimpse of that terrible scene of The Last Judgment, whose prodigious effect imprints a sort of terror in the soul.

Finally, finally I do not know what else to say; I am deeply moved while telling you, if telling is possible, because you have to see and hear it to believe it.

Easter Sunday, it is an entirely different thing. All that the imagination can dream up of pomp and ceremony will still be far from reality, it's all one can do not to be dazzled.

For several days I only saw the Pope, the cardinals, the wealth of gold, silver, jewels and decorations and all that in a Saint Peter, that is itself one of the seven wonders by its vastness and its riches. In fact, I will be able to tell you about the Vatican, itself alone, as long as I live."


Ingres is widely regarded as the greatest portrait painter of the nineteenth century and one of the most brilliant draftsmen of all time. Ingres' art asserts the supremacy of academic tradition, linear contour, and design

A contemporary art critic, Lenormant, who had a mission to encourage religious art, was rather critical of this painting. He found fault with the air of emotional and spiritual detachment of the painting. He said: "M. Ingres painted the pontifical Mass in the Sistine Chapel- nothing more, nothing less." The critic then went on to consider why Ingres did not develop into a religious painter like Ingres`s great hero, Raphael. Perhaps Ingres was more concerned with art than anything else: Art for the sake of Art.

Perhaps the restraint and detachment was because of his times. He lived through the passionate times of the French Revolution, the Reign of Terror, and the reestablishment of the French monarchy. He knew the dangers of partisanship. Perhaps in those times, Art became his refuge.

However there is another explanation. It was painted during a low point of his career. Ingres was forced to depend for his livelihood on the execution, in pencil, of small portrait drawings of the many tourists, in particular the English, passing through postwar Rome.

His friend, the painter François-Marius Granet (French, 1775–1849) was more successful doing touristic scenes of Rome than he was doing highbrow history paintings, so he tried to beat Granet at his own game. However, although this painting was relatively successful, Granet trumphed him with his painting,The Choir of the Capuchin Church in Rome (see below). 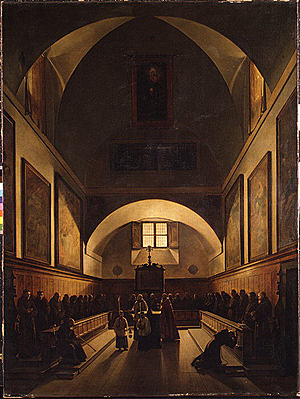 
Pope Pius VII loved it. The King of Spain ordered a copy.

Ingres couldn't stand it. ''Fashion and infatuation have loaded him with goods and honours since he did a painting of the 'Capuchins,' '' he fumed about Granet. ''He is a compound of selfishness and ambition such that, with his 'Capuchins,' he has pushed me aside in Rome.''

The Met describes Granet`s painting in this way:

"François-Marius Granet, a notably pious man, conceived this subject in reaction to anticlericalism during Napoleon's occupation of Rome.

The French authorities banished the Capuchin order from the church of the Immaculate Conception, near the Piazza Barberini, even billeting troops there for a time.

Nevertheless, this painting of the church's interior was purchased by the emperor's sister Caroline Murat, queen of Naples, for her brother Louis Bonaparte, who had seen it exhibited in the painter's studio, where it created a sensation at the end of 1814.

Pius VII, the same pope who had been forced to preside over Napoleon's coronation a decade earlier, asked to meet the artist as a result of the exhibition. Granet went on to paint perhaps a dozen or more versions of this subject, most on commission. It is without doubt his most famous composition"


Whilst staying in Rome, Granat got possession of a cell in the convent of Capuchins mentioned above. The convent was inhabited almost exclusively by artists. It is the Church of the convent which gave him the inspiration for the painting.
Posted by Unknown at 6:29 pm