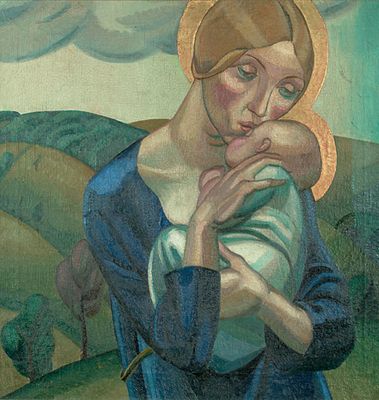 The Public Catalogue Foundation is a registered charity based in Covent Garden, London.

It was set up to photograph and record all oil, acrylic and tempera paintings in publicly owned collections in the UK.

This includes works in museums (both on display and in store) as well as paintings in council buildings, universities, hospitals, police stations and fire stations.

It is estimated that there are some 200,000 such paintings in the UK.

However, at any one time some 80% of these are hidden from public view, being either in storerooms or public buildings in official use.

The aim of the Foundation is to improve public access to these paintings by producing a series of affordable colour catalogues on a county-by-county basis. These will later go online allowing the public free access to the works they own.

The painting by David Jones is one of the paintings so far catalogued.
Posted by Unknown at 5:07 pm