Feast of the Queenship of Mary 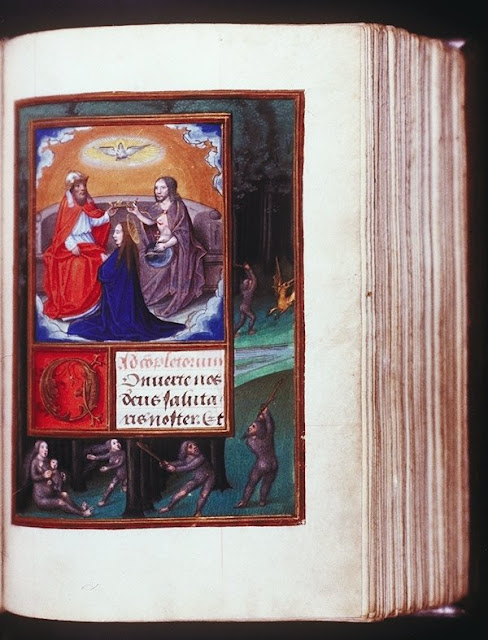 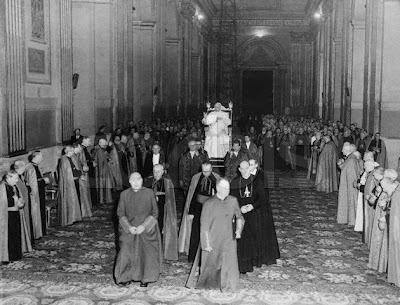 November 1954 Pope Pius XII is borne past two rows of Cardinals at Vatican City after a special ceremony for the the Feast of the Queenship of Mary.
Almost a century later (1950), Pius XII in turn proclaimed the dogma of the Assumption of Mary which holds that since the Virgin was free of original sin, her body must be incorruptible and was physically taken into Heaven. Mary is thus "superior" to all other creatures, save God.
Her "queenship" follows as a consequence.
Time Magazine reported on the Institution of the Feast of the Queenship of Mary so:

In Rome, with massive solemnity, the canons of Santa Maria Maggiore took down from the altar the painting of Mary and Child known as Salus Populi Romani (Safety of the Roman people). Holding high the holy, red-brown painting, done on wood and attributed by Catholics to St. Luke, they marched through the streets of Rome, followed by a vast procession. On the steps of St. Peter's, the canons of the cathedral received the Salus Populi and placed the image on a dais in Michael-angelo's basilica. There, this week, in the presence of some 40 cardinals, more than 200 bishops, Pope Pius XII would fix jewel-studded crowns to the painting, first above the Infant's head, then above the Virgin's, to symbolize the fact that the Roman Catholic Church regards the Virgin as the reigning "Queen of Heaven [and] of all creation."

In a 4,000-word encyclical. Ad Coeli Reginam (to the Queen of Heaven), the Pope established May 31 as the feast of Blessed Mary. Wrote the Pope: "The Son of God reflects on His . . . Mother the glory, the majesty, the power of Regality which springs from being associated with [Him] . . . Hence the Church ... acclaims her . . . Queen of Heaven."

By this action at the end of the Marian Year, Pius XII strengthened the ancient Marian movement, which is spreading with new vigor among Catholics. The theological foundations of Mary-veneration were laid in the first century A.D. In the Catacombs, Rome's persecuted Christians painted pictures of the Virgin, emphasizing her sanctity. Thereafter, a long line of saints—among them Irenaeus, Ambrose, Jerome and Augustine—laid stress on her sinlessness. In a poem, St. Ephrem (300-379) had Mary addressing God: "Let Heaven uphold me in its embrace, because I am more honored than it. Heaven is only your throne, it isn't your mother. How much more a mother of a king is to be honored than a king's throne."

During the later Middle Ages, Franciscans established a famed theological epigram: Potuit, decuit, ergo fecit—God could do it; it was fitting that He should do it; therefore He actually did it, i.e., keep Mary free of sin. These traditions were embodied in the dogma of the Immaculate Conception (1854), which holds that God "exempted" Mary from the hereditary stain of original sin by making her immaculate at the moment of her conception in the womb of St. Anne, her mother. Mary was thus preserved free of all sin in anticipation of her role as the Mother of God.
Posted by Unknown at 6:41 pm