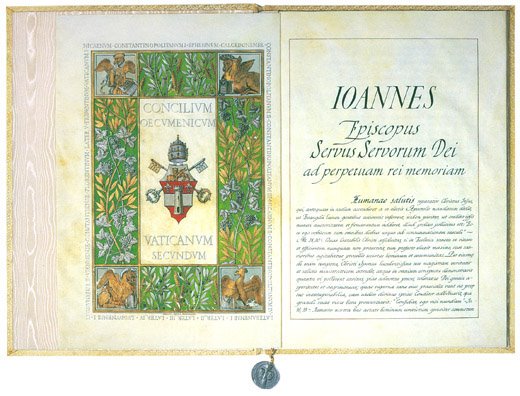 The bull has the rota, the holograph signature of the pontiff (Ego Ioannes Catholicae Ecclesiae episcopus) and the signatures of 62 cardinals, among which there was that of Cardinal Montini, the successor of Pope John

On the left side of the document, there are some didactic decorations: in a rectangle divided into squares, olive branches, grain and tendrils, the symbol of the four evangelists on the sides, the pope’s coat of arms in the centre.

Around the drawing, starting from the left external margin, there are the names of the previous ecumenical councils.

The Latin text of the Bull is here on the Official Vatican website. (in Latin) and in Spanish here.

Unfortunately there is no official English translation on the website.
The Bull was of course the official order convoking the Second Vatican Ecumenical Council.
Posted by Unknown at 6:26 pm