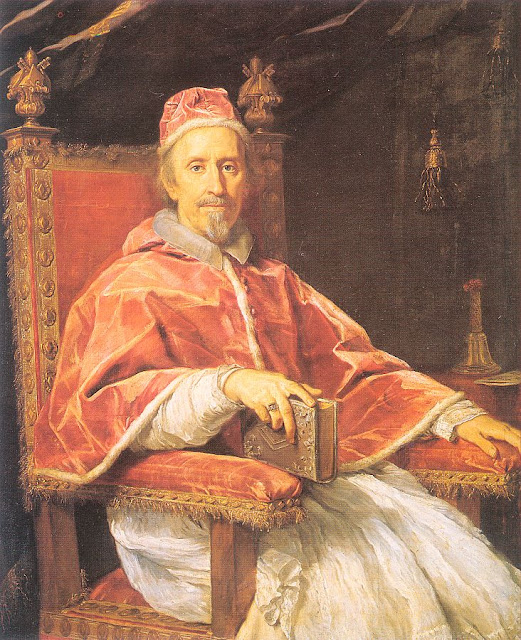 
Maratta was the leading painter in Rome after 1669.

He re-worked themes from the High Renaissance in High Baroque style.

Many of his altarpieces are still in place in the Roman churches which commissioned the works.

This portrait was made of Pope Clement IX shortly before his death. Another version is in The Hermitage State Museum, St Petersburg.

The signature of the artist and the date is on the paper on the table.

The portrait is reminiscent of Velasquez`s Portrait of Innocent X.

The reign of Clement IX was short- only two years from 1667 to 1669. He favoured the French party over the Spanish party.

He took the name "Clement" and "Clement" appears to have been his nature: despite the various serious ailments which he suffered including (allegedly) epilepsy.

His rule was generally reckoned to be clean and good. He was benevolent and affable in disposition. So was his rule.

He was a man of great accomplishment.

He wrote poetry, dramas and libretti, as well as what may be the first comic opera.

He wrote the libretti for the Roman operas on the lives of the saints: Sant`Alessio (1632), Santa Teodora (1635), San Bonifazio (1638), Il Sant’Eustachio (1643) and La Vita Humana. Operas with sacred subjects were performed not only in colleges, private theatres and palaces but also in monasteries. In 1636, "after dinner in the monastery of the Padri Ministri degli Infermi there was represented in music the Life of Saint Mary Magdalene in the presence of seven cardinals, the Prince Prefect of Rome, many prelates and other gentlemen of the court."

He also opened the first public opera house in Rome, and for the Carnival celebrations of 1668, commissioned Antonio Maria Abbatini of the Sistine Chapel Choir to set to music his free Italian translation of a Spanish religious drama La Baltasara. The production had sets designed by Bernini.

His name is mainly associated with the ten statues of angels by Bernini and his associates which were placed on Ponte S. Angelo in Rome

He ordered his remains to be buried under the pavement of Santa Maria Maggiore, with the simple inscription Clementis IX, Cineres, but his successor, Clement X, erected in his honour the sumptuous monument which stands at the right-hand side of the nave.

Occasionally the operas are performed.

La Vita Humana and La Baltasara were performed by the Glasgow International Early Music Festival, at Glasgow's Tramway, in 1990 and 1992. See :this website

More recently Les Arts Florissants put on a production of Sant`Alessio in the USA, London and Caen (France)

French TV highlights of the production (Caen)
Posted by Unknown at 6:18 pm