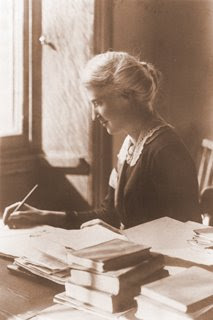 The end of the First World War in 1918 did not mean the end of misery and problems.

The aftermath of the massive dislocation caused by war left huge problems. The epidemic of Spanish Influenza killed more than had died through fighting in the War just ended.

In Central Europe famine stalked the land along with disease, lack of housing, and destitution.

Many died. Worst affected were the children. Many were orphans who could not look after themselves. Many states did not have the resources,infrastructure or political will to look after them.

The situation was also made worse by the fact that there were still forms of hostilitites. For example, after the war ended, the British government kept up a blockade that left children in cities like Berlin and Vienna starving. Tuberculosis and rickets were rife.

One of the notable charities which helped deal with the problem was a British charity called "Save the Children". It is still in existence. It is still doing good work. Its website is here.

The present patron is HM the Princess Royal

The charity was founded by Eglantyne Jebb and her sister Dorothy Buxton. The Save the Children Fund was set up at a public meeting in London's Royal Albert Hall in May 1919

Fight the Famine raised money very quickly. Single donations ranged from two shillings to £10,000. It gave the money to organisations working with children in Germany, Austria, France, Belgium, the Balkans and Hungary and for Armenian refugees in Turkey.

During the 1921 famine in Russia, the organisation was able to mount an operation to feed 650,000 people - for a shilling (5 pence) per person per week.

It must be the only Charity which has ever been singled out for praise in a Papal Encyclical and which also called on Catholics worldwide to donate to it.

In Annum Iam Plenus (1st December 1920) Pope Benedict XV focused on the tragic situation in Central Europe. He had already appealed for funds for the peoples of Central Europe the year before in his Encyclical Paterno Iam Diu (24th November 1919)

"In this matter We cannot desist from offering a public tribute of praise to the society entitled the "Save the Children Fund," which has exerted all possible care and diligence in the collection of money, clothing, and food.

But, indeed, the general scarcity and the high cost of living, which the war has brought in its train, are of such a complex and varied character that the assistance We have rendered has perhaps neither succeeded in reaching those parts of Europe where necessity pressed hard, nor, where help was given, has it always been adequate to the actual need....

Accordingly it is Our wish that you forthwith announce throughout the whole of your several dioceses that a collection of alms is to be made on the twenty-eighth day of this month, the feast of the Holy Innocents, or if you prefer, on the Sunday immediately preceding, for the support of the children made needy by the way and that you particularly recommend this collection to the children in your diocese; further, that with all diligence in your power you see that the money thus collected is sent either to Us or to the "Save the Children Fund," which We have before mentioned."

Pope Benedict XV, granted Eglantyne Jebb an audience in 1920. At the close of their meeting, he said: 'Having set your hand to the plough, do not turn back! Do not turn back.'
Posted by Unknown at 7:48 pm