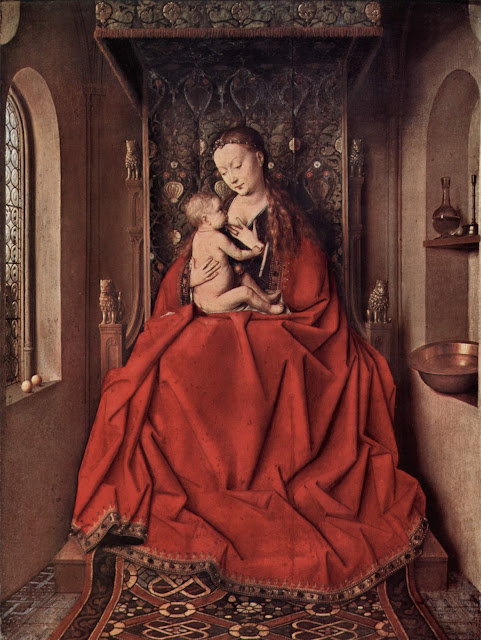 It is known as the Lucca Madonna because it was part of the collection of Charles II, Duke of Parma and Lucca, in the early 19th century.

It is an intimate portrait of the Virgin and Child.

The Virgin nourished Christ. He in turn will nourish the faithful

Pictures and visions of the lactating Blessed Virgin Mary were not uncommon in medieval times.

The artist presents us with a space solely constructed for venerating Virgin and Child.. There are: a large regal canopy, cloth of honour, oriental rug, painted floor tiles. On the right, the brass candlestick, basin and glass vase perhaps convey the idea of a chapel or place of veneration.

Mary wears a diadem set with pearls with a jewel for the forhead. Her dress is gold-hemmed and ermine lined. The blue dress is under a loose red cape with gold trimmings set with pearls and jewels.

The size of the Virgin in contrast to the surroundings also suggest a powerful regal figure. The oversized Madonna symbolises her centrality to the Church.

Yet there is also a feeling that this is a domestic scene.

In composition, the picture is rigidly symmetrical. Great care and calculation have been taken in the composition of the painting.

Mary was often discussed and debated in the fifteenth century.

The Council of Basle (1435-1439) ruled in favour of the Immaculate Conception in 1439. However the Pope had withdrawn from the discussions of the Council by this time. It had to await the time of Blessed Pope Pius IX before the issue was formally made part of official dogma.

The Virgin sits on a throne with four small lion statues. There is an analogy to the throne of Solomon. Mary is therefore seen as the Throne of Wisdom which holds the Christ child.

The light flooding through the panes and the glass pitcher also suggest Mary. Many 14th and 15th century texts glorify Mary based on the comparison:

"Like a ray of light penetrates glass without destroying it, Mary became a mother without losing her virginity."

Mary`s clothing is positioned in such a way that it appears that the child rests on a table or altar.

The washbasin and carafe suggest cleanliness or purity.
Posted by Unknown at 9:29 pm