Beauty and the Saints 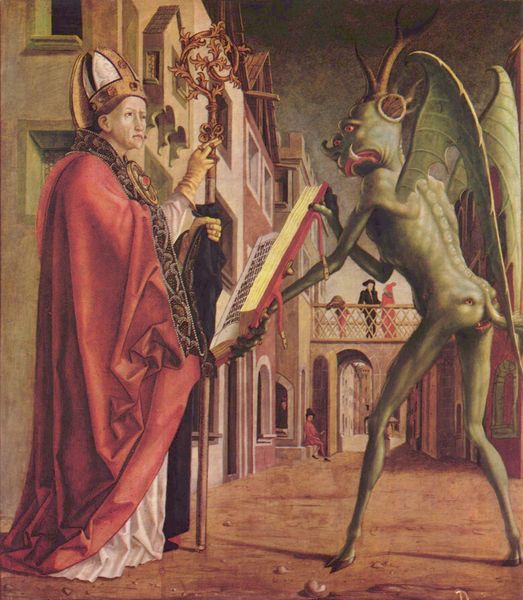 "I did once say that to me, art and the saints are the greatest apologetic for our faith."

He explained: "The arguments contributed by reason are unquestionably important and indispensable, but then there is always dissent somewhere.

"On the other hand, if we look at the saints, this great luminous trail on which God passed through history, we see that there truly is a force of good that resists the millennia. […] Likewise, if we contemplate the beauties created by faith, they are simply, I would say, the living proof of faith."

The Pope pointed to the example of the cathedral where he was meeting with the priests. "It is a living proclamation," he said. "It speaks to us itself, and on the basis of the cathedral's beauty, we succeed in visibly proclaiming God, Christ and all his mysteries: Here they have acquired a form and look at us."

The Holy Father said great works of art "are all a luminous sign of God and therefore truly a manifestation, an epiphany of God."

"I think the great music born in the Church makes the truth of our faith audible and perceivable," he continued. "In listening to all these works […] we suddenly understand: It is true! Wherever such things are born, the Truth is there.

Without an intuition that discovers the true creative center of the world, such beauty cannot be born."

Benedict XVI affirmed that reason must be open to the beautiful.

"When, in our epoch, we discuss the reasonableness of faith, we discuss precisely the fact that reason does not end where experimental discoveries end -- it does not finish in positivism," the Pope explained.

"The theory of evolution sees the truth but sees only half the truth: It does not see that behind it is the Spirit of the Creation. We are fighting to expand reason, and hence for a reason which, precisely, is also open to the beautiful and does not have to set it aside as something quite different and unreasonable."

"Christian art is a rational art," the Holy Father went on.

"[I]t is the artistic expression of a greatly expanded reason, in which heart and reason encounter each other. This is the point.

I believe that in a certain way this is proof of the truth of Christianity: Heart and reason encounter one another, beauty and truth converge, and the more that we ourselves succeed in living in the beauty of truth, the more that faith will be able to return to being creative in our time too, and to express itself in a convincing form of art."

Most of the modern Popes since the Renaissance have expressed the importance of the arts to faith. St Pope Pius X and Chant, Pope Benedict XV and literature (Dante) springs to mind.

As regards the visual arts, much is owed to Pope Pius XI as the following extract from The Times of 18th August 1925 demonstrates:

Pacher was born in the year of 1435 in Bruneck near Brixen (Bressanone) on the southern slopes of the Tyrolian Alps in the territory of the Alto Adige of modern Italy. Most of his career was spent at Bruneck

He worked mainly for local churches, carrying out the carving as well as the painting of his altarpieces, and much of his work is still in situ. His most celebrated work is the St Wolfgang altarpiece (1471-81) in the church of St Wolfgang on the Abersee.

While on holiday, on August 6, 2008, Pope Benedict XVI took a question and answer session with priest and seminarians at Bressanone (Brixen).

He said that Apologetics has two great pillars: Beauty and the saints.

Zenit provides his full talk on this theme.