Reformation in the Alps 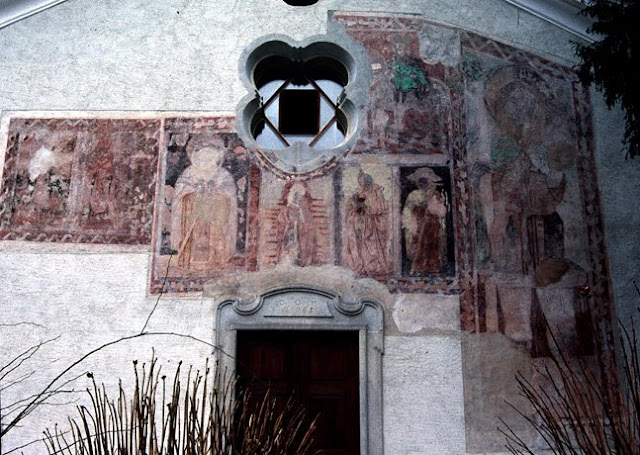 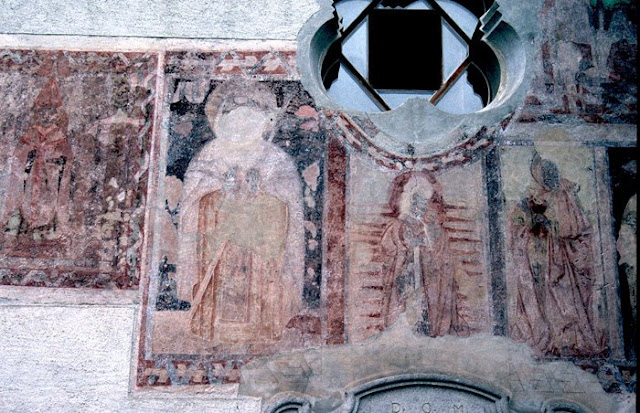 The Protestant Reformation had an effect of the visible appearance of churches where it took effect.

The Swiss canton of Grisons embraced the new dispensation in the first half of the sixteenth century.

The "Reform" took one of two methods: the actual destruction of the image; and/or the painting over of the image.

If the latter, many of the medieval images were in fact preserved beneath a coat of white paint. At the end of the nineteenth century, these images became to be "re-discovered".

The above images are from the ancient Church of San Martino de Bondo in the Val Bregaglia in the Canton des Grisons. The village became Protestant in 1522. The images were simply painted over.

The medieval images now uncovered were probably painted by a local or travelling master sometime around 1481. The painter whose name has not been handed down was probably from Lombardy.

Some of the faces of the images have been damaged through some process of obliteration. The image of the Virgin Mary has in particular suffered from this kind of treatment.

In the first image above, the Virgin is surrounded by a number of saints. On the left is Saint John, Saint James and (the ever popular) Saint Christopher.

To the right of the Virgin are Saint Anthony and a bishop Saint.

Beneath can be seen the figures of Saint Martin and probably the commissioner of the painting, the bishop Coire Ortlieb de Brandis (1458-1491)

One good thing at least has come of the "destruction": we now can see how colourful were medieval churches both inside and out.
Posted by Unknown at 5:44 pm