The Quarrel Over Images

"8. The terrible "quarrel over images" that tore the Byzantine Empire apart under the Isaurian emperors Leo III and Constantine V, between 730 and 780, and again under Leo V, from 814 to 843, is explained mainly by the theological debate which was originally at stake.

Without ignoring the danger of an ever possible resurgence of the idolatrous practices of paganism, the Church permitted that the Lord, the Blessed Virgin Mary, the martyrs and the saints should be represented in pictorial form or in sculpture to sustain the prayer and devotion of the faithful.

It was clear to everyone, according to Saint Basil's formula recalled at Nicaea II, that "the honor rendered to the icon reaches the prototype." In the West, Pope Saint Gregory the Great had insisted on the didactic aspect of the paintings in the churches, which were useful for the illiterate "to read on the walls what they were incapable of reading in books," and stressed that this contemplation should lead to the adoration of the "one and omnipotent Holy Trinity."

It is in that context that there developed, particularly in Rome in the eighth century, the cult of images of the saints which gave rise to an admirable artistic production.

In breaking with the authentic tradition of the Church, the iconoclast movement considered the veneration of images as a return to idolatry.

Not without contradiction or ambiguity, they forbade representations of Christ and religious images in general but continued to allow profane images, in particular those of the Emperor with the signs of reverence that were attached to them. The basis of the iconoclast argument was of a Christological nature. How was it possible to depict Christ, who unites in his person, without confusing or separating them, the divine nature and the human Nature?

To represent his unfathomable divinity would be impossible; to represent him in his humanity would only be to divide him, to separate the divinity and humanity in him. To choose one or the other of these options would lead to the opposed Christological heresies of Monophysitism and Nestorianism. For, in trying to represent Christ in his divinity, one would necessarily have to absorb his humanity; in showing only a human picture, one would hide the fact that he is also God.

9. The dilemma posed by the iconoclasts involved much more than the question of the possibility of Christian art; it called into question the whole Christian vision of the reality of the Incarnation and therefore the relationships of God and the world, grace and nature, in short, the specific character of the "new covenant" that God made with humanity in Jesus Christ.

The defenders of images saw it well: according to the Patriarch of Constantinople, Saint Germain, an illustrious victim of the iconoclast heresy, it is "the divine economy according to the flesh" that was being questioned. For, to see represented the human face of the Son of God, "image of the invisible God," (Col. 1, 15), is to see the Word made flesh (cf. John 1, 14), the Lamb of God who takes away the sin of the world (cf. John 1, 29).

Therefore art can represent the form, the effigy of God's human face and lead the one who contemplates it to the ineffable mystery of God made man for our salvation.

Thus Pope Hadrian could write: "By means of a visible face, our spirit will be carried by a spiritual attraction towards the invisible majesty of the divinity through the contemplation of the image where is represented the flesh that the Son of God deigned to take for our salvation. May we thus adore and praise him together while glorifying in spirit this same Redeemer for, as it is written, `God is Spirit,' and that is why we spiritually adore his divinity."

Hence, Nicaea II solemnly reaffirmed the traditional distinction between "the true adoration (latreia)" which "according to our faith is rendered to the unique divine nature" and "and the prostration of honor (timetike proskynesis) "which is attributed to icons, for "he who prostrates before the icon does so before the person(hypostasis) who is represented therein."

Therefore the iconography of Christ involves the whole faith in the reality of the Incarnation and its inexhaustible meaning for the Church and the world. If the Church practices it, it is because she is convinced that the God revealed in Jesus Christ has truly redeemed and sanctified the flesh and the whole sensible world, that is man with his five senses, to allow him to be ever renewed in the image of his creator (cf. Col. 3, 10)."

Pope John Paul II, DUODECIMUM SAECULUM (On the Occasion of The Twelfth Centenary of the Second Council of Nicaea (787)). December 4, 1987

One does wonder what would have happened if the Iconoclasts had "won" , and the Second Council of Nicaea had decided differently.

Pope John Paul II in the above passage makes mention of artistic production in Rome in the eighth century. Perhaps he had in mind the Church of Santa Maria Antiqua located in the Roman Forum.

It was founded in the mid 6th century A.D.and contains a unique collection of wall paintings spanning a period (6th - late 8th century) that is unequalled.

See the website of The Santa Maria Antiqua Project

For pictures see below. 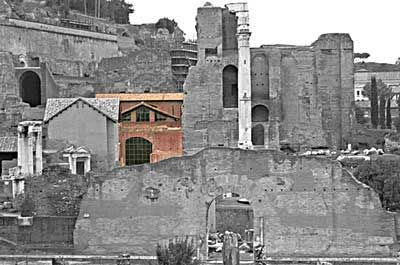 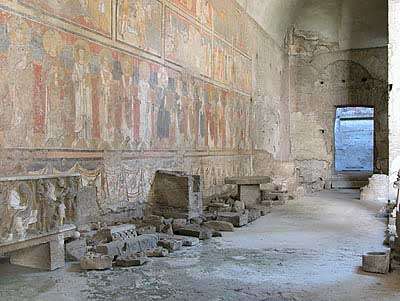 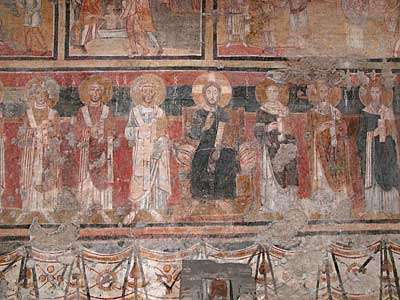 Detail of the central part of the wall. The lower register represents Christ enthroned flanked by Greek saints (on his right) and Latin saints (on his left). The two registers above represent scenes from the Old Testament. In the second half of the 8th century, the ancient tradition of naturalistic representation was abandonedThe long wall of the left nave with the painting scheme from the time of Pope Paul I (757-767), which extended also onto the long wall of the right nave. The scheme consists of three figurative registers above a painted velum.