A Vision of St Gertrude the Great 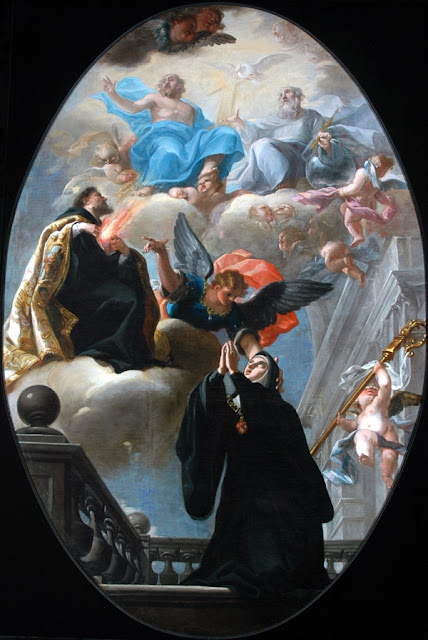 Attrib. to Isidoro Arredondo (c1657-1712),
The Vision of St. Gertrude the Great (St Gertrude of Helfta) with St Augustine and the Holy Trinity (c1673-1712)
Oil on canvas
246.3 x 163.8 cm
The Bowes Museum, Barnard Castle, County Durham
St. Gertrude kneels at the bottom on the right in a nun's habit with a chain around her neck composed of the letters GERTR and a hear-shaped locket with a representation of the Infant Christ.
The Museum speculates on the identity of the male on the left:

"The male saint with the flaming heart may be Saint Augustine, who also wrote on the subject of visionary contemplation."

But the attribution is debatable. It rests on an opinion of Alfonso E. Pérez Sánchez, from the Prado, on the grounds of its resemblance to a drawing The Ecstasy of Saint Teresa by Arrendondo (private collection, Madrid). Other suggested artists for the composition are: José Ximénez Donoso; and a follower of Claudio Coello
Isidoro Arredondo specialised in religious subjects and theatrical decorations. He was one of the Royal painters
The composition follows instructions on the appropriate representation of visions prescribed in Dialogues on Painting (De las Excelencias de la Pintura or Diálogos de la pintura, su defensa, origen, essencia, definición, modos, y differencias) by Vicente Carducho (1568–1638) (1633)
The painting is an interesting example of the promotion of the cult of St Gertrude the Great by the Spanish Crown which led to the spread of the devotion of St Gertrude to Spain and Spanish possessions overseas.
As regards the suggested subject matter, it represents a vision of St Gertrude the Great.
The flaming heart and the presence of the Trinity supports the suggestion of the other kneeling male saint as St Augustine. Both symbols are associated with St Augustine, the great Doctor of the Church. Further St Gertrude the Great, one of the earliest followers of the Devotion to the Sacred Heart, had a great devotion to St Augustine (as well as the Trinity). She had visions of the Trinity as well as St Augustine
In Chapter 50 of the Revelations, St Gertrude described one of her many visions, this time one of some which she had involving St Augustine :

"On the same day, as the Saint reflected on the glory of St. Augustine, to whom she had always been devout, and thanked God for the favours He had bestowed on him, he appeared to her with St. Bernard, as if equal to him in glory, as he had been equal to him in sanctity arid doctrine.
This great Bishop stood before the throne of the Divine Majesty, magnificently apparelled, while rays of ardent fire appeared to shoot forth from his heart, as also from the heart of St. Bernard, towards that of Jesus Christ ; this indicated the eloquence by which the holy doctor had enkindled the fire of Divine love in the hearts of men.
Rays of light, like sunbeams, proceeded from his lips, which filled the whole heavens, and figured the abundant and marvellous doctrines with which he had enlightened the Church. Beneath these rays there appeared arcades of light, of admirable clearness, which attracted the attention of all, and gave abundant pleasure and content to those who gazed upon them.
As the Saint beheld this with joy and admiration, she learned from St. Bernard that these arcades represented the light of the doctrine of St. Augustine, and his immense labours in defence of the Catholic faith by his discourses, and by his writings and his ardent desires ; having been brought, after so many wanderings, from the darkness of ignorance to the light of faith, that he might be able to close up the way of error to all men, and to open the way of the true faith.
St. Gertrude then inquired of St. Bernard if he had not had the same end in his writings. He replied : I spoke, wrote, and acted under the impulse of an impetuous love of God ; but this illustrious doctor wrote from a principle of Divine love, and moved by the miseries which he had himself experienced.
Our Lord then drew to Himself from the blessed and from the hearts of the faithful still on earth the faith, consolation, light, and love which the writings of St. Augustine had produced ; perfecting this, uniting it to His Heart, and then pouring it forth into the heart of the Saint, whose soul was penetrated by this Divine influence, and became like a harp before God, emitting the most perfect and the sweetest melody ; and as the virginity and love of God had formed an admirable concert in the heart of St. Bernard, the penitence and fervent love of St. Augustine produced a similar effect, so that it was impossible to decide which was the most melodious.
After this, St. Bernard informed St. Gertrude that the melodies which she heard were those which were spoken of in the words, Omnis ilia Deo, for the heart of each saint emits a melody which corresponds to its virtues, and all are ever employed in the Divine praises."

"Legatus II, Abundance of the Memorial of the Divine Sweetness, is Gertrude’s spiritual autobiography and the first part of the composite work to be written. She uses the style of, and numerous allusions to, the most famous of all Christian conversion stories: Augustine’s Confessions. Gertrude reads her memories through Augustine’s, and his story through her experience, to illuminate each for the spiritual benefit of her readers.

Both Gertrude and Augustine describe union with God as transformation of the human heart through the memory of Christ’s passion.

(From THEOLOGY AS CONVERSATION: GERTRUD OF HELFTA AND HER SISTERS AS READERS OF AUGUSTINE by Laura Marie Grimes (Ph. D. thesis: .pdf file)

For more see:
The life and revelations of Saint Gertrude, virgin and abbess, of the Order of St. Benedict (c. 1871))
Frederick William Faber, All for Jesus: or, The easy ways of divine love (1855)
Virgin saints of the Benedictine Order (1903)
Posted by Unknown at 7:39 pm