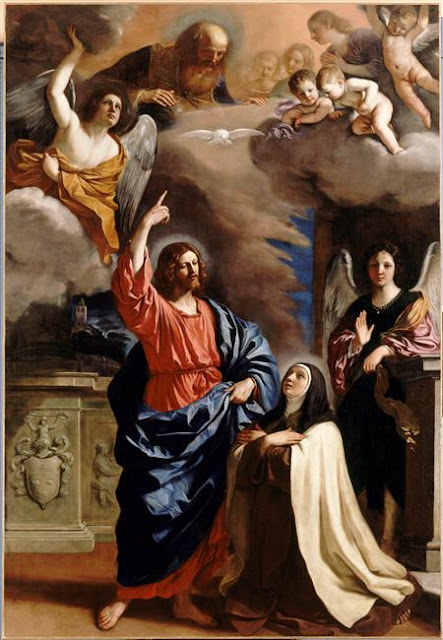 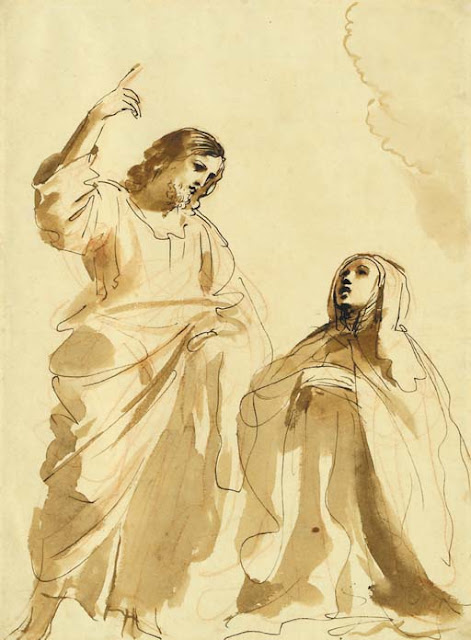 Giovanni Francesco Barbieri, il Guercino (1591-1666)
Christ appearing to Saint Teresa
Red chalk, pen and brown ink, brown wash, watermark helmet in a shield
12¼ x 9¼ in. (312 x 234 mm.)
Private collection
One of the  preparatory drawings for the painting now in the Musée Granet was auctioned by Christies in 2001 in New York
The Christie`s catalogue entry is most instructive:

"The picture is recorded in Guercino's Libro dei Conti on 5 January 1634 and on 18 August 1634, ...
The first entry concerns the commission for a 'Tavola di Santa Teresia per il Sigr. Lumaga di lione di Francia da cordo in ducatni 400'.
On 18 August payment was registered, and the picture was probably finished.
The picture was then sent to Barthélémy Lumagne in Lyon, who hung it in his family chapel in the Church of the Carmelites.
It was transfered to Paris during the French Revolution and then sent to Aix-en-Provence in 1821.
Drawings related to this composition are at Windsor Castle (D. Mahon and N. Turner, op. cit., nos. 78-82), in the Seattle Art Museum, Washington (D.M. Stone, op. cit., no. 31), in the British Museum, London, in the Teyler Museum, Haarlem, in Cento and in Angers."