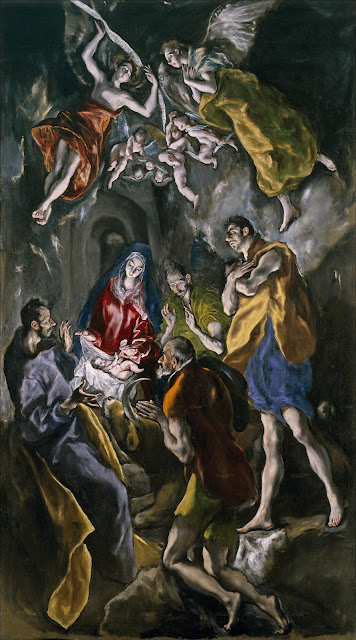 El Greco (Domenikos Theotokopoulos) (1541 - 1614)
Adoración de los pastores / Adoration of the Shepherds 1612-1614
Oil on canvas
319 cm x 180 cm
Museo Nacional del Prado, Madrid
Yesterday I drew attention to the "off the cuff" speech by Pope Benedict to the Bishops gathered for the Special Synod of the Bishops in the Middle East
The speech of the Pope has attracted a great deal of attention.
Whatever you might think about this Pope, it is clear that he is no "lame duck". Who else could produce a mini-Encyclical at the drop of a hat ? Always grounded in Scripture, Tradition, Faith and Reason
The speech has now been translated into English. There are two translations so far on the net:
one on Sandro Magister entitled "It is the faith of the simple that knocks down false gods";
the other being the official "unofficial" translation by the Holy See produced in "double quick" time (please can we have more and quicker translations into English?)
It really needs to be read in full: slowly, not once but a number of times.
Of the reactions, I prefer that of Father Ray in Brighton: Pope Benedict on Dei Genetrix

"Pope Benedict spoke of Our Lady as Theotokos, Dei Genetrix in the most beautiful and profound words that I think I have ever read on her. ... this is worth reading and re-reading again and again."

The speech really is a most beautiful and profound reflection on Mary and her role with Christ, Redemption, the Church and Salvation. In places the speech reads and sounds like poetry, a prayer in honour of Mary.
Without Mary, there would have been no Incarnation, no Christ, no Crucifixion, no Resurrection, no Church, no salvation.
Mary was the door by which CHrist entered the world and was present at the birth of his Church on Pentecost.
She was the only human being to ever intimately know God fully: both flesh and Word. Her flesh and blood were his flesh and blood.
She was there at his birth, the main events of his short life and at his death. She was one of the witnesses to his Resurrection and at his Ascension.
She received his spirit not once but twice: at the Annunciation and at Pentecost
The significance of the title Theotokos is that it affirms important truths about Jesus. It helps to state what is not God. It helps us to identify false Gods which of course is what the Pope also addressed in his talk.
Here is one beautiful section of the Pope`s speech :

"Aristotelian philosophy, as we well know, tells us that between God and man there is only an unreciprocated relationship. Man refers to God, but God, the Eternal, is in Himself, He does not change: He cannot have this relation today and another relationship tomorrow. He is within Himself, He does not have ad extra relations.
It is a very logical term, but it is also a word that makes us despair: so God has no relationship with me.
With the incarnation, with the event of the Theotokos, this has been radically changed, because God drew us into Himself and God in Himself is the relationship and allows us to participate in His interior relationship.
Thus we are in His being Father, Son and Holy Spirit, we are within His being in relationship, we are in relationship with Him and He truly created the relationship with us.
At that moment, God wished to be born from woman and remain Himself: this is the great event. Because Christ was not born like any other individual. He was born to create a body for Himself: He was born - as John says in Chapter 12 of his Gospel - to attract all to Him and in Him. ...
He was born - as it says in the Letters to the Colossians and to the Ephesians - to summarize the whole world, He was born as the firstborn of many brothers, He was born to unite the cosmos in Him, so that He is the Head of a great Body. Where Christ is born, the movement of summation begins, the moment of the calling begins, of construction of his Body, of the Holy Church.
The Mother of Theos, the Mother of God, is the Mother of the Church, because she is the Mother of He who came to unite all in His resurrected Body.
Saint Luke leads us to understand this in the parallel between the first chapter of his book and the first chapter of the Acts of the Apostles, which repeat the same mystery on two different levels.
In the first chapter of the Gospel the Holy Spirit comes upon Mary and thus she gives birth to and gives us the Son of God. In the first chapter of the Acts of the Apostles, Mary is at the center of Jesus’ disciples who are praying all together, pleading with the cloud of the Holy Spirit.
And thus from the believing Church, with Mary at its heart, is born the Church, the Body of Christ.
This dual birth is the only birth of the Christus totus, of the Christ who embraces the world and all of us."

The painting by El Greco decorated his family tomb in the Monastery of St Dominic (Santo Domingo El Antiguo) in Toledo.
It is one of his late works and is probably in his own hand exclusively
He pictures himself as one of the shepherds. He is a simple witness to the fact of the Incarnation.
Gregory the Great in speaking of religious art and images said that one of the functions of religious art and therefore the religious artist is to be a witness. "“A picture is a testis, an authoritative witness”
Mary reveals the Christ to those standing around: the Angels above, the men who come to worship and the rest of Creation
The picture is filled with light. The Light of the World (Lux Mundi) has been born. The Christ is the centre of the composition. From him seems to emanate a light which illuminates the spectators surrounding him.
The Angels are carrying a banner which reads: "Gloria in excelsis Deo et terra pax hominibus bona voluntatis."
It is thought that El Greco chose this episode because of the meaning of his last name Theotocopoulus and its affinity with the word Theotokos meaning “Mother of God”
There seems to be no sound. Simply silence. Even the Angels appear quiet. They proclaim their message by writing on a banner. But there is silent mental prayer. Note the attitude of some of the figures praying including the shepherd El Greco: the ancient Greek method of prayer.
Erwin Strauss described it thus:

"The ancient Greek attitude of praying — upright, arms lifted and extended — opened and widened the body space in an enthusiastic gesture — ‘enthusiastic’, indeed, because ‘entheosiastic’ means ‘to receive God, to be possessed by him’.

The witnesses are rapt in prayer, rapt in ecstasy and in wonderment
Posted by Unknown at 8:36 pm