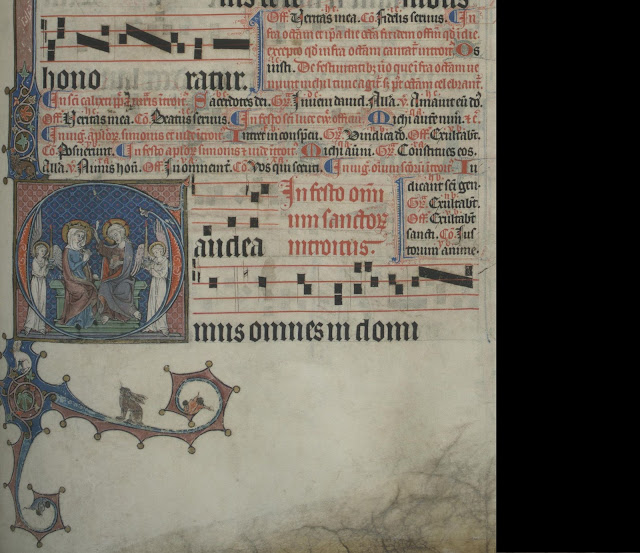 Johannes von Valkenburg flourished c 1299
All Saints Day: The Crowning of Mary
From Gradual 1299
Illuminated manuscript on parchment
Written for the Convent of the Minorites, Cologne
Codex 1001b
Dombibliothek, Köln
Johannes von Valkenburg introduces himself as the inscriber and illuminator of this Gradual composed for the Franciscan convent at Cologne, Germany in 1299:

He was a Fransciscan friar who came from Valkenburg (now Limburg in the Netherlands), He was a friar at the Franciscan convent of St Clare in Cologne.
On the title page of the Gradual is his Portrait and dedication:

His style was influenced by contemporary Mosan manuscripts and stained glass painting in Cologne.
Above is his Introit for All Saints Day: "Gaudeamus Omnes in Domino"
Still on the theme of the Feast of All Saints is a cutting (below) from another manuscript by the circle of Johannes von Valkenburg showing in the initial "G" Christ enthroned handing crowns to male and female saints. The "G" is from "Gaudeamus omnes in Domino", the Introit for All Saints. 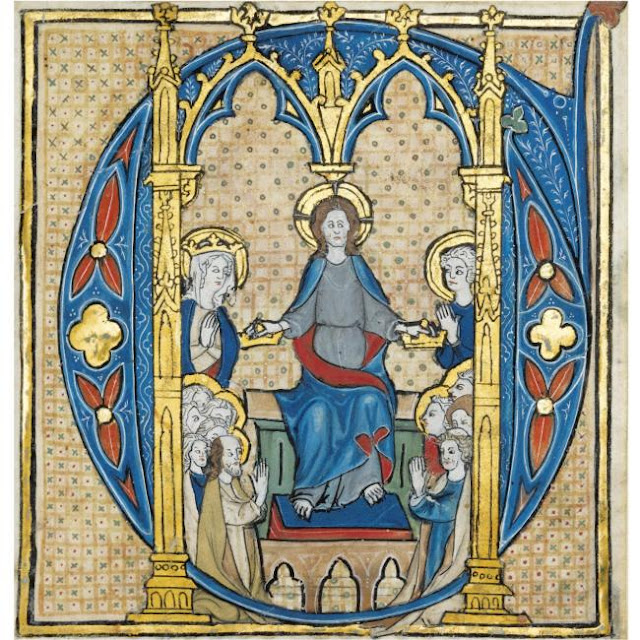 The circle of Johannes von Valkenburg
The Initial "G" from the Introit of All SaintsShowing Christ enthroned handing crowns to male and female saints
c. 1299
Illuminated manuscript cutting
110 x 115 mm
Private collection
The chant "Gaudeamus" was used also for the the Introit of the Feast of St Francis and other Franciscan saints and other important Feasts of the Church.
Franciscan chant was and is a musical product of its time, and its time was late medieval. It is no less beautiful than Gregorian chant, but its beauties come forth in a different light.
The Introit "Gaudeamus" reads:

Gaudeamus omnes in Domino, diem festum celebrantes sub honore Sanctorum omnium: de quorum solemnitate gaudent Angeli, et collaudant Filium Dei. -- Exsultate justi in Domino: rectos decet collaudatio. V.: Gloria Patri . . . -- Gaudeamus omnes
Let us all rejoice in the Lord, celebrating a festival day in honor of all the Saints: at whose solemnity the Angels rejoice, and give praise to the Son of God. -- (Ps. 32.1). Rejoice in the Lord, ye just: praise becometh the upright. V.: Glory be to the Father . . . -- Let us all rejoice. . .