The Fall of the Divinities 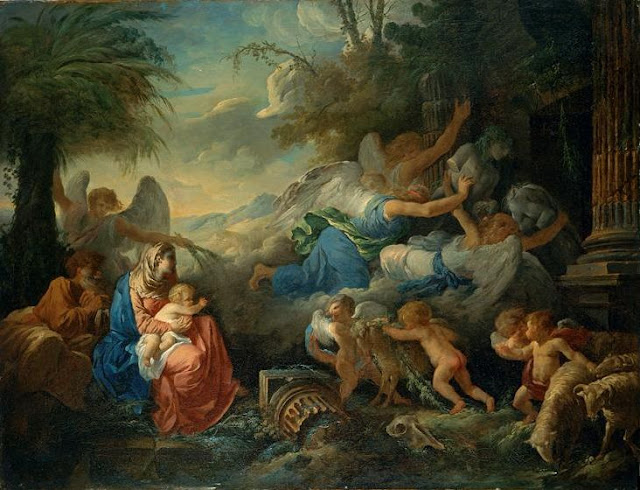 Jean-Jacques Lagrenée le Jeune (1739-1821)
La Chute des idoles et le repos pendant la fuite en Egypte / The Destruction of the Idols and the rest on the Flight into Egypt c 1775
Oil on canvas
89 cm x 117 cm
Musée des Beaux-Arts, Rennes
The Gospels are almost silent as to what happened when the Holy Family fled to Egypt to escape the massacre of young children ordered by Herod
Matthew 2:13-23 is quite uninformative about this period of the lives of the Holy Family.
In the New Testament Apocrypha, various stories are narrated about what is said to have happened.
These stories of the time in Egypt have been especially important to the Coptic Church, which is based in Egypt
The Apocryphal Gospels recount that when Jesus took refuge in Sotine in Egypt, the 365 idols of the capitol fell down. Awed by this prodigy, Aphrodisius, remembered the fate of Pharaoh and hastened with his army to adore the Child Jesus, recognizing His Divinity.
This "Destruction of the Idols" tradition appears not to be as well known as it once was in the West although it is still prevalent in the Christian Middle East
It was often depicted in art: see above.
One of the most famous depictions of the scene is that on the Triumphal Arch of Santa Maria Maggiore in Rome. (see below) The Arch mosaics date from about AD 431 and were meant to commemorate the Council of Ephesus in AD 431

The declaration at the Council that Mary was the Mother of God did of course lead to the re-building of the Basilica of Santa Maria Maggiore. The rebuilding by Pope Sixtus III was in celebration of this declaration by the Council.
As mentioned before the recent ex tempore speech by the Pope at the opening of the Synod of Bishops from the Far East did attract attention.
Much of the attention was directed to the foretelling of the weakening and destruction of the present False Gods or Deities.
For example see:
Sandro Magister "It is the faith of the simple that knocks down false gods"
and
Whispers in the Loggia: "These Divinities Must Fall"... But English PopeTalk Coverage Keeps "Capital" Anonymous
Particular and sensational emphasis was placed in the Italian Press on what was seen as an attack on International Capitalism as one of the Four Great Evils which had to be destroyed.
See
Corriere della Sera: Il Papa: «I capitali anonimi potere distruttore che minaccia il mondo»
Its subheading indicated quite clearly what it thought the Pope was trying to say:

From reading some of the press one might have thought that Papa Ratzinger had become "Red Ratzinger" and was just about to mount an attack on the barricades of the Bank of Italy and the Italian Stock Exchange.
There have always been mutterings from some who see Caritas in Veritate as another Manifesto composed in a famous library by another German academic in exile from his native land.
A great deal of emphasis has been given to one passage in particular, quoted completely out of context (and not always fully and not always accurately):

"Let us remember all the great powers of today’s history, let us remember the anonymous capital that enslaves man, which is no longer in man’s possession, but is an anonymous power served by men, by which men are tormented and even killed. It is a destructive power, that threatens the world. And then the power of the terroristic ideologies. Violent acts are apparently made in the name of God, but this is not God: they are false divinities that must be unmasked; they are not God. And then drugs, this power that, like a voracious beast, extends its claws to all parts of the world and destroys it: it is a divinity, but it is a false divinity that must fall. Or even the way of living proclaimed by public opinion: today we must do things like this, marriage no longer counts, chastity is no longer a virtue, and so on.
These ideologies that dominate, that impose themselves forcefully, are divinities. And in the pain of the Saints, in the suffering of believers, of the Mother Church which we are a part of, these divinities must fall, what is said in the Letters to the Colossians and to the Ephesians must be done: the dominations, the powers fall and become subjects of the one Lord Jesus Christ."

It might be worthwhile to re-read the speech in full a few times again and remind ourselves of several points:
1. It was a speech to a Synod of Bishops from the the Middle East. No one needs to be reminded that at present perhaps more than at any time in recent history it is probably one of the most dangerous places on the planet. Iran has threatened the very existence of Israel. It would appear that it is about to acquire a nuclear capability. It has powerful allies in Gaza and Lebanon. It has developed very close ties with Syria and Turkey. Iran`s neighbours are Iraq and Afghanistan.
2. These Bishops and their congregations are from this area which is predominantly Muslim and are subject to persecution, imprisonment, martyrdom and pressures which force them to be in exile from their homelands. In some cases and in some minds the mere fact of being a Christian puts them on the side of the Western enemy
3. It was a speech for these Bishops at this particular time in their particular region in these particular circumstances.
4. The commentators who see the Pope`s words as a call to battle are perfectly correct. But it is to a battle of a different sort to what they are thinking. A Christian` s religious war does not involve violence to others. They do not mention or refer to the Pope`s prescriptions to a terrible state of affairs:

"And in the pain of the Saints, in the suffering of believers, of the Mother Church which we are a part of, these divinities must fall, what is said in the Letters to the Colossians and to the Ephesians must be done: the dominations, the powers fall and become subjects of the one Lord Jesus Christ.
On this battle we find ourselves in, of this taking power away from God, of this fall of false gods, that fall because they are not deities, but powers that can destroy the world, chapter 12 of Revelations mentions these, even if with a mysterious image, for which, I believe, there are many different and beautiful interpretations.
It has been said that the dragon places a large river of water before the fleeing woman to overcome her. And it would seem inevitable that the woman will drown in this river. But the good earth absorbs this river and it cannot be harmful.
I think that the river is easily interpreted: these are the currents that dominate all and wish to make faith in the Church disappear, the Church that does not have a place anymore in front of the force of these currents that impose themselves as the only rationality, as the only way to live.
And the earth that absorbs these currents is the faith of the simple at heart, that does not allow itself to be overcome by these rivers and saves the Mother and saves the Son. (emphasis added)
This is why the Psalm says - the first psalm of the Hour - the faith of the simple at heart is the true wisdom (cf Psa. 118:130).
This true wisdom of simple faith, that does not allow itself to be swamped by the waters, is the force of the Church. And we have returned to the Marian mystery.
And there is also a final word in Psalm 81, “movebuntur omnia fundamenta terrae” (Psa 81:5), the foundations of earth are shaken. ...
The external foundations are shaken because the internal foundations are shaken, the moral and religious foundations, the faith that follows the right way of living. And we know that faith is the foundation, and, undoubtedly, the foundations of the earth cannot be shaken if they remain close to the faith, to true wisdom.
And then the Psalm says: “Arise, God, judge the world” (Psa 81:8).
Thus we also say to the Lord: “Arise at this moment, take the world in your hands, protect your Church, protect humanity, protect the earth”.
And we once again entrust ourselves to the Mother of God, to Mary, and pray: “You, the great believer, you who have opened the earth to the heavens, help us, open the doors today as well, that truth might win, the will of God, which is the true good, the true salvation of the world”.
Amen"