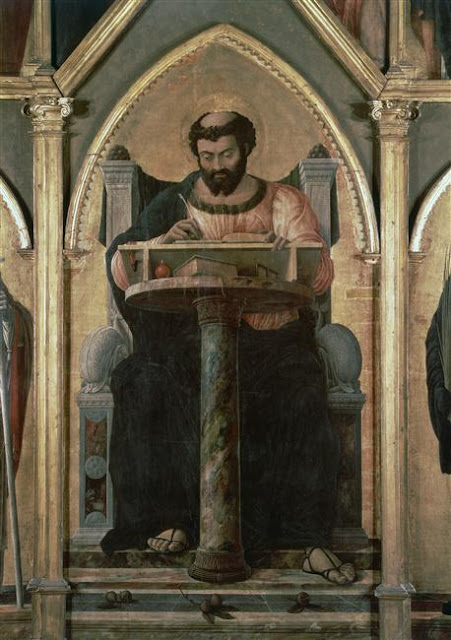 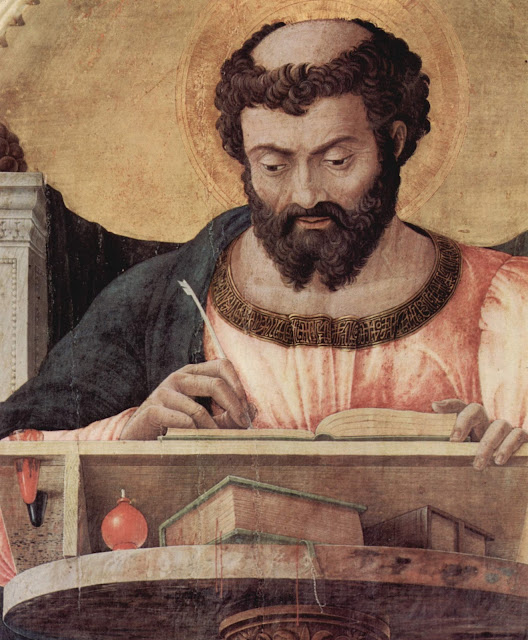 Andrea Mantegna 1431 - 1506
Saint Luke 1453- 1454
From The Polyptych of St Luke
Tempera, gold leaf, oil on wood
140 x 67 cm
Pinacoteca di Brera, Milan, Italy
(Originally from the Monastery of Santa Giustina, Padua)
On August 10, 1453, Mantegna signed a contract to paint the work for the monastery of Santa Giustina in Padua.
The central figure of the Polyptych is that of St Luke
The city of Padua (Padova) in Italy as well as having a great devotion to St Anthony also had a great devotion to St Luke.
There was a tradition that the body of St Luke was taken to Padua before 1177. It was housed in the Monastery of Santa Giustina in Padua where the remains still lie.
The last public exhibition of the relics was in 1562. Since then the cult fell into desuetude. It was forgotten.
That is until October 1992
It was then that the Bishop of Padua, Antonio Mattiazzo, was formally requested by the Orthodox Metropolitan of Thebes, Hyeronimus, asking him for “a significant fragment of the relics of St. Luke to be placed on the site where the holy tomb of the Evangelist is located and venerated today.
That started an investigation into the relics stored in Santa Giustina
The examination began in 1998 and concluded in 2000, with a surprising result that confirmed the ancient tradition or at least was not inconsistent with it
The story is in Andrea Tornelli, Luke: The Beloved Physician
See also: Nicholas Wade, The Body of St Luke Gains Credibility
Message of Pope John Paul II to The Archbishop of Padua (Antonio Mattiazzo) for the Feast of the Evangelist Luke (15 October 2000)
In the Letter of Pope John Paul II to the Archbishop of Padua he wrote:

"The celebrations taking place on the occasion of this Congress offer a new incentive for this beloved Church in Padua to rediscover the true treasure that St Luke has left us: the Gospel and the Acts of the Apostles. ...
[An] essential dimension of Christian and Church life, on which Luke's account throws vivid light, is that of the evangelizing mission.
Luke indicates the permanent foundation of this mission, that is, the uniqueness and universality of the salvation wrought by Christ (cf. Acts 4: 12). The saving event of Christ's death and resurrection does not close the history of salvation, but marks the beginning of a new phase, characterized by the mission of the Church, which is called to communicate the fruits of the salvation achieved by Christ to all nations.
For this reason, Luke's Gospel is followed, as its logical consequence, by the history of the mission.
It is the Risen One himself who gives the missionary "mandate" to the Apostles: "Then he opened their minds to understand the Scriptures, and said to them, "Thus it is written, that the Christ should suffer and on the third day rise from the dead, and that repentance and forgiveness of sins should be preached in his name to all nations, beginning from Jerusalem. You are witnesses of these things. And behold, I send the promise of my Father upon you; but stay in the city, until you are clothed with power from on high'" (Lk 24: 45-49).
The Church's mission begins at Pentecost "from Jerusalem" to expand "to the ends of the earth". Jerusalem does not mean just a geographical point. Rather it signifies a focal point of salvation history. The Church does not leave Jerusalem to abandon her, but to graft the pagan nations onto the olive tree of Israel (cf. Rom 11: 17).
It is the Church's task to put the leaven of God's kingdom (cf. Lk 13: 20-21) into history. A demanding task, it is described in the Acts of the Apostles as a tiring and difficult journey, but one that is entrusted to "witnesses" full of enthusiasm, initiative and joy, who are ready to suffer and give their lives for Christ. This inner energy is communicated to them by their communion of life with the Risen One and by the power of the Spirit that he gives.
What a great resource it can be for the Church in Padua to compare herself constantly with the message of the Evangelist, whose mortal remains she preserves! "