St Gertrude of Halfta and The Wreck of The Deutschland 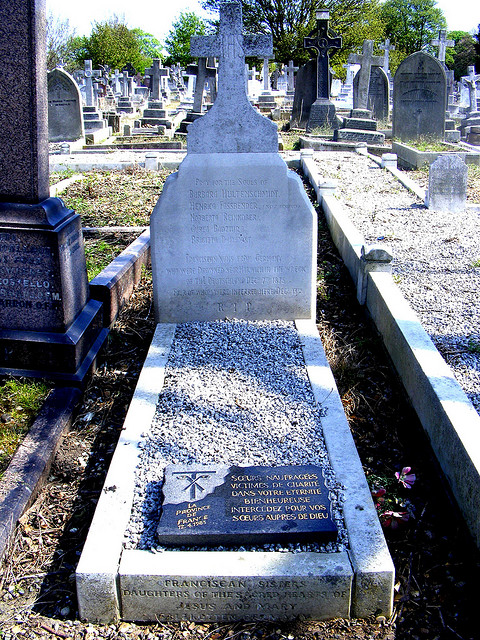 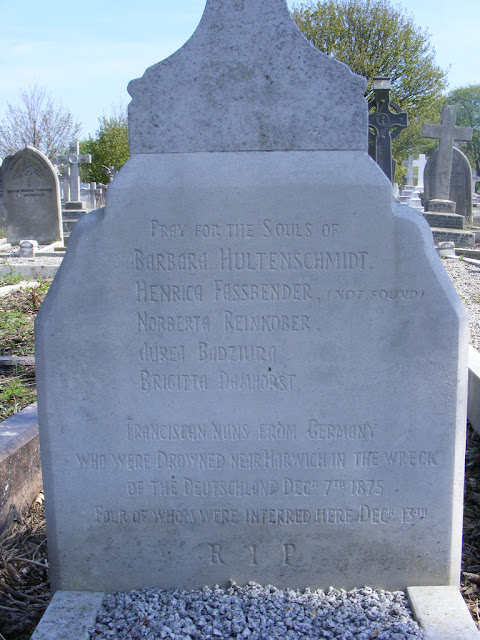 "Pray for the Souls of Barbara Hultenschmidt ,Henrica Fassbender (not found), Norberta Reinkober, Aurea Badziura and Brigitta Damhorst.
Franciscan Nuns from Germany who were Drowned near Harwich in the wreck of the Deutschland Dec 7th 1875. Four of whom were interred here Decr. 13th. RIP"

The sinking of SS Deutschland (1866) in December 1875 was one of the great Victorian maritime disasters
The German liner became stranded on the Kentish Knock while en route from Bremen for Southampton and New York with passengers, emigrants, and general cargo. It happened in severe fog and snowstorms, which also prevented her signals of distress from being seen. Amongst those who died were five Franciscan nuns. The nuns had been expelled from Germany under Bismarck`s Kulturkampf laws. En route to fulfil their vocation, they perished in the tragedy.
Of the five, only four of the bodies were discovered. The fifth remained undiscovered. The four were buried in St Patrick's Cemetery, Leytonstone E11
This incident inspired the poem by Gerard Manley Hopkins (1844–89). 'The Wreck of the Deutschland'
The poem is dedicated to

"the happy memory of five Franciscan Nuns exiles by the Falk Laws drowned between midnight and morning of Dec. 7th. 1875"

On that night when the nuns were on board the ship, Hopkins recalls that he was in Wales in one of the Jesuit houses.
The reference to Gertrude is to St Gertrude the Great, the subject of yesterday`s talk by Pope Benedict XVI.
It would appear that Hopkins thought (wrongly) that St Gertrude of Halfta and Luther were born in the same town. Hopkins contrasts the two traditions in Germany: Lutheranism and Catholicism
It would appear that in the turbulent scenes, the leader of the nuns was seen standing and heard calling ‘O Christ, Christ, come quickly’
In the poem Hopkins teases out what the nun may have meant and the influence of St Gertrude of Halfta is evident.

"20
She was first of a five and came
Of a coifèd sisterhood.
(O Deutschland, double a desperate name! 155
O world wide of its good!
But Gertrude, lily, and Luther, are two of a town,
Christ’s lily and beast of the waste wood:
From life’s dawn it is drawn down,
Abel is Cain’s brother and breasts they have sucked the same.) 160
21
Loathed for a love men knew in them,
Banned by the land of their birth,
Rhine refused them. Thames would ruin them;
Surf, snow, river and earth
Gnashed: but thou art above, thou Orion of light; 165
Thy unchancelling poising palms were weighing the worth,
Thou martyr-master: in thy sight
Storm flakes were scroll-leaved flowers, lily showers—sweet heaven was astrew in them.
22
Five! the finding and sake
And cipher of suffering Christ. 170
Mark, the mark is of man’s make
And the word of it Sacrificed.
But he scores it in scarlet himself on his own bespoken,
Before-time-taken, dearest prizèd and priced—
Stigma, signal, cinquefoil token 175
For lettering of the lamb’s fleece, ruddying of the rose-flake.
23
Joy fall to thee, father Francis,
Drawn to the Life that died;
With the gnarls of the nails in thee, niche of the lance, his
Lovescape crucified 180
And seal of his seraph-arrival! and these thy daughters
And five-livèd and leavèd favour and pride,
Are sisterly sealed in wild waters,
To bathe in his fall-gold mercies, to breathe in his all-fire glances.
24
Away in the loveable west, 185
On a pastoral forehead of Wales,
I was under a roof here, I was at rest,
And they the prey of the gales;
She to the black-about air, to the breaker, the thickly
Falling flakes, to the throng that catches and quails 190
Was calling ‘O Christ, Christ, come quickly’:
The cross to her she calls Christ to her, christens her wild-worst Best.
25
The majesty! what did she mean?
Breathe, arch and original Breath.
Is it love in her of the being as her lover had been? 195
Breathe, body of lovely Death.
They were else-minded then, altogether, the men
Woke thee with a we are perishing in the weather of Gennesareth.
Or is it that she cried for the crown then,
The keener to come at the comfort for feeling the combating keen? "

"He was to cure the extremity where he had cast her;
Do, deal, lord it with living and dead;
Let him ride, her pride, in his triumph, despatch and have done with his doom there.
29
Ah! there was a heart right! 225
There was single eye!
Read the unshapeable shock night
And knew the who and the why;
Wording it how but by him that present and past,
Heaven and earth are word of, worded by?— 230
The Simon Peter of a soul! to the blast
Tarpeian-fast, but a blown beacon of light.
30
Jesu, heart’s light,
Jesu, maid’s son,
What was the feast followed the night 235
Thou hadst glory of this nun?—
Feast of the one woman without stain.
For so conceivèd, so to conceive thee is done;
But here was heart-throe, birth of a brain,
Word, that heard and kept thee and uttered thee outright. 240
31
Well, she has thee for the pain, for the
Patience; but pity of the rest of them!
Heart, go and bleed at a bitterer vein for the
Comfortless unconfessed of them—
No not uncomforted: lovely-felicitous Providence 245
Finger of a tender of; O of a feathery delicacy, the breast of the
Maiden could obey so, be a bell to, ring of it, and
Startle the poor sheep back! is the shipwrack then a harvest, does tempest carry the grain for thee?"

One is reminded of two quotations from St Gertrude of Helfta referred to by the Pope in his talk of yesterday:

"However, acknowledging her poverty and unworthiness, she adheres to the will of God, "because," she affirms, "I have taken such little advantage of your graces that I cannot decide to believe that they were given to me for myself, your eternal wisdom not being able to be frustrated by anyone. Hence, let it be, O Giver of all good, who have freely given me such undeserved gifts, that, reading this writing, the heart of at least one of your friends be moved by the thought that zeal for souls has induced you to leave during such a long time a gem of such inestimable value in the midst of the abominable mire of my heart" (The Revelations, II, 5, p. 100f)"

"In the Seventh Exercise, that of preparation for death, St. Gertrude writes:

"O Jesus, you who are immensely loved by me, be always with me, so that my heart will remain with you and your love persevere with me without the possibility of division, and my passing be blessed by you, so that my spirit, free from the ties of the flesh, may immediately be able to find rest in you. Amen" (Esercizi, Milan, 2006, p. 148)".

See also : German TV programme re The Deutschland: "Journeys into the Unknown: The 31-hour Ordeal of the DEUTSCHLAND"
Kongregation der Franziskanerinnen von Salzkotten (the order to which the five nuns belonged)
Posted by Unknown at 11:32 pm