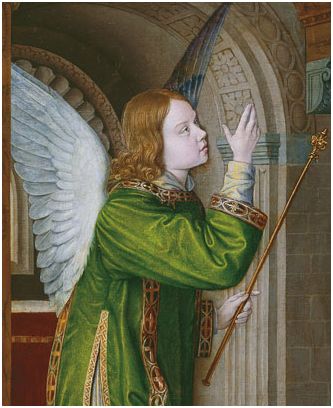 Jean Hey known as The Master of Moulins , French, active c. 1475–c. 1505.
The Annunciation (detail)
1490-95
The Art Institute of Chicago, Illinois
In his recent Letter to Seminarians (18 October 2010, the Feast of Saint Luke the Evangelist), Pope Benedict XVI touched on many subjects. One subject was the need to respect "popular pieties":
He said:

"I urge you to retain an appreciation for popular piety, which is different in every culture yet always remains very similar, for the human heart is ultimately one and the same. Certainly, popular piety tends towards the irrational, and can at times be somewhat superficial. Yet it would be quite wrong to dismiss it. Through that piety, the faith has entered human hearts and become part of the common patrimony of sentiments and customs, shaping the life and emotions of the community. Popular piety is thus one of the Church’s great treasures. The faith has taken on flesh and blood. Certainly popular piety always needs to be purified and refocused, yet it is worthy of our love and it truly makes us into the "People of God"."

He has previously spoken of "popular piety" as "one of our strengths". Why a "strength" ?
He said:
"because it consists of prayers deeply rooted in people's hearts. These prayers even move the hearts of people who are somewhat cut off from the life of the Church and who have no special understanding of faith.
All that is required is to "illuminate" these actions and "purify" this tradition so that it may become part of the life of the Church today. " (Lenten Meeting with the Clergy of Rome on Thursday, 22 February 2007)
What is Popular Piety ?
On 14th December 2001 Pope John Paul II approved the "Directory on Popular Piety. Principles and Guidelines" compiled by the Congregation for Divine Worship and the Discipline of the Sacraments
"Popular pieties" are those diverse cultic expressions of a private or community nature which, in the context of the Christian faith, are inspired predominantly not by the Sacred Liturgy but by forms deriving from a particular nation or people or from their culture. The expression includes processions, pilgrimage, Eucharistic Adoration, veneration of Mary and of the Saints together with relics, and so on
In his Apostolic Letter Vicesimus Quintus Annus, (4th December 1988) John Paul II raised the question again in relation to the liturgical renewal and indicated that it remained among those to be addressed at a future date:

"[P]opular piety can neither be ignored nor treated with indifference or disrespect because of its richness and because in itself it represents an religious attitude in relation to God. However, it has to be continually evangelized, so that the faith which it expresses may become more mature and authentic. The pious exercises of the Christian people and other forms of devotion can be accepted and recommended provided that they do not become substitutes for the Liturgy or integrated into the Liturgical celebrations. An authentic pastoral promotion of the liturgy, will know how to build on the riches of popular piety, purify them and direct them towards the Liturgy as an offering of the people"

Liturgy is supreme. Pious practices are secondary to liturgy.
Why is there a need to stop the ridicule and undermining of popular piety ? How does the ridicule and the undermining arise ?
Because it is not regarded as mature, proper or correct or intellectually justifiable
At the 10th Ordinary General Assembly of the Synod of Bishops (October 2001), Archbishop Zelimir Puljic the then Bishop of Dubrovnik (now Archbishop of Zara)(Croatia) said:.

For example:- the Classic-Marxist interpretation according to which popular piety or popular religion "is a level of the oppressed"; --

the Anticlerical-lay interpretation for which explains popular piety or popular religion is like "a protest against the official religion of the hierarchy", --

the New Illuminist interpretation which affirms that popular piety or popular religion is a "expression of no culture, of no civilization of uneducated, rough and culturally undeveloped people." –

There is even the "Infantilistic" interpretation which explains popular piety or popular religion as "an expression of immature and infantile persons";--

Lastly, there is a Socio-Bourgeois interpretation which explains the popular piety or popular religion as "a religious expression of the average man in a sociologic sense." "

However it is clear that like Pope John Paul II and the present Pope regard popular piety as an important means of evangelisation. It is a conscious and radical departure from the time of the Church immediately after the Second Vatican Council when Rationalism held sway and ruled.
For instance Pope John Paul II explained to the Spanish Episcopal Conference on Saturday, 15 November 1997:

"Your patrimony also includes the many forms of popular piety so deeply rooted in Spanish towns and villages. Despite the prevailing rationalism of certain periods in our recent history, this popular piety reflects a "thirst for God that only the poor and simple can know" (Paul VI, Apostolic Exhortation Evangelii nuntiandi, n. 48) and has shown that God speaks plainly to the heart of the human being, who has the right to express due worship in the way best suited to him.
This is how it was understood by the Second Vatican Council, which recommends "popular devotions of the Christian people, provided they conform to the laws and norms of the Church" (Sacrosanctum Concilium, n. 13).
Doubtless, in some cases customs pass on elements foreign to authentic Christian religious expression. Nonetheless the Church, concentrating more on the profound dispositions of the soul than on ritual formalism, shows understanding and patience, in accordance with St Augustine’s warning: "what we teach is one thing and what we can allow another" (cf. Contra Faustum, 20, 21).
That is why "she studies with sympathy and, if possible, preserves intact anything in these people’s way of life which is not indissolubly bound up with superstition and error" (Sacrosanctum Concilio, n. 37).
I encourage you then to maintain and foster with paternal affection and pastoral prudence those forms of piety in which Eucharistic adoration, devotion to the Blessed Virgin Mary or veneration of saints are concretely practised, avoiding illegitimate distortions and improper exaggerations through appropriate catechesis, and above all, by integrating devotion with active participation in the sacraments and the celebration of the liturgy, whose centre is Christ's paschal mystery."