The Rosary and the Dominicans 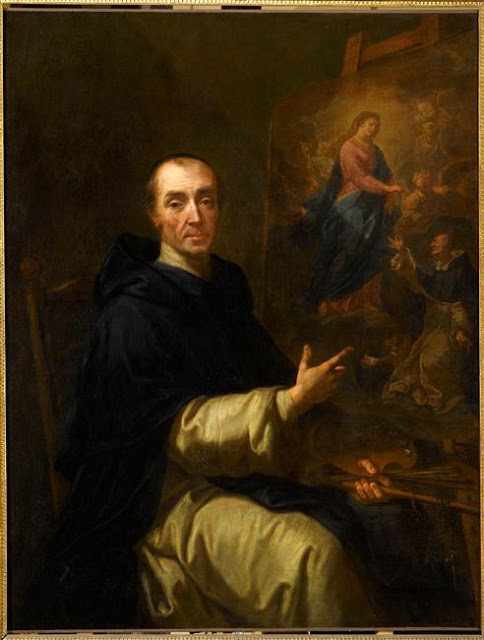 André Jean (1662 - 1753) (in religion Frère André)
Portrait de l'artiste peignant l'apparition de Notre-Dame du Rosaire à saint Dominique/ Portrait of the Artist painting the Apparition of Our Lady of the Rosary to Saint Dominic (c 1721 - 5)
Oil on canvas
1.49 x 1.15m
Châteaux de Versailles et de Trianon, Versailles
(Inscription: F.J.ANDRE PINXIT R.D.PREDICATORUM )
Frère André became a Dominican at the age of 17 years. He studied under various masters including Carlo Maratta in Rome
The painting La Vierge donnant le rosaire à saint Dominique was painted in 1712 for Notre-Dame du Chapelet in Bordeaux (also known as Saint-Dominique)
It seems to have been quite a favourite theme for Frère André. Other paintings by him on this theme are in the Cathedral of Lyon as well as Montbrun-les-Bains, near Marseilles
The link between the Rosary and the Dominican order is of long standing and the two are almost inseparable
The Pope of the Rosary, Pope Leo XIII set out some of the early history of the Rosary and the Dominican Order in his Encyclical Supremi Apostolatus Officio (On Devotion to the Rosary) on 1st September, 1883
He discussed in particular the devotion of the Popes to the Rosary: in particular the Dominican Pope and Saint, Pope Pius V, and the institution of the feast of Our Lady of Victories

"Our merciful God, as you know, raised up against these most direful enemies a most holy man, the illustrious parent and founder of the Dominican Order. Great in the integrity of his doctrine, in his example of virtue, and by his apostolic labours, he proceeded undauntedly to attack the enemies of the Catholic Church, not by force of arms; but trusting wholly to that devotion which he was the first to institute under the name of the Holy Rosary, which was disseminated through the length and breadth of the earth by him and his pupils. ...
The efficacy and power of this devotion was also wondrously exhibited in the sixteenth century, when the vast forces of the Turks threatened to impose on nearly the whole of Europe the yoke of superstition and barbarism.
At that time the Supreme Pontiff, St. Pius V., after rousing the sentiment of a common defence among all the Christian princes, strove, above all, with the greatest zeal, to obtain for Christendom the favour of the most powerful Mother of God.
So noble an example offered to heaven and earth in those times rallied around him all the minds and hearts of the age. And thus Christ's faithful warriors, prepared to sacrifice their life and blood for the salvation of their faith and their country, proceeded undauntedly to meet their foe near the Gulf of Corinth, while those who were unable to take part formed a pious band of supplicants, who called on Mary, and unitedly saluted her again and again in the words of the Rosary, imploring her to grant the victory to their companions engaged in battle.
Our Sovereign Lady did grant her aid; for in the naval battle by the Echinades Islands, the Christian fleet gained a magnificent victory, with no great loss to itself, in which the enemy were routed with great slaughter.
And it was to preserve the memory of this great boon thus granted, that the same Most Holy Pontiff desired that a feast in honour of Our Lady of Victories should celebrate the anniversary of so memorable a struggle, the feast which Gregory XIII. dedicated under the title of "The Holy Rosary."
Similarly, important successes were in the last century gained over the Turks at Temeswar, in Pannonia, and at Corfu; and in both cases these engagements coincided with feasts of the Blessed Virgin and with the conclusion of public devotions of the Rosary.
And this led our predecessor, Clement XI, in his gratitude, to decree that the Blessed Mother of God should every year be especially honoured in her Rosary by the whole Church.
Since, therefore, it is clearly evident that this form of prayer is particularly pleasing to the Blessed Virgin, and that it is especially suitable as a means of defence for the Church and all Christians, it is in no way wonderful that several others of Our Predecessors have made it their aim to favour and increase its spread by their high recommendations.
Thus Urban IV, testified that:

"every day the Rosary obtained fresh boon for Christianity."

Sixtus IV declared that this method of prayer

"redounded to the honour of God and the Blessed Virgin, and was well suited to obviate impending dangers;"

"it was instituted to oppose pernicious heresiarchs and heresies;"

while Julius III called it

"the glory of the Church."

"with the spread of this devotion the meditations of the faithful have begun to be more inflamed, their prayers more fervent, and they have suddenly become different men; the darkness of heresy has been dissipated, and the light of Catholic faith has broken forth again."

Lastly Gregory XIII in his turn pronounced that

"the Rosary had been instituted by St. Dominic to appease the anger of God and to implore the intercession of the Blessed Virgin Mary."